Trending
You are at:Home»Travelextras»February 2008- Malaysia 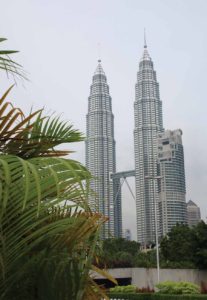 Malaysia’s dance of the seven veils has been a joy to behold. In the late 1970s and early 1980s it revealed its beach destinations to Ireland’s growing band of holiday hunters, Penang and half a dozen others whose white sand, palm lined beaches fill our brochures.

Then we got interested in the exotic jungles of Sabah and Sarawak, the Borneo provinces – as far from peninsular Malaysia as Poland is from us. Nearly 15,000 Irish people a year now travel to Malaysia.

But the one that was most familiar, the stopover destination of Kuala Lumpur, has been overlooked for what it is.

When Malacca was a famous destination, Kuala Lumpur was a river swamp, prone to flooding. The last ten years has seen the rise of a new type of tourist destination, the Asian citybreak.

The Asian citybreak was a creation of the stopover requirements of Aussie-bound airlines, but it has now got a life of its own, with, Singapore, Hong Kong, Dubai, Bangkok and Bombay featuring alongside Kuala Lumpur.

KL, as they call it, wanted to be top of the market. They built the signature attractions – the KL tower and the Petronas Towers, two of the tallest structures in the world. Tourists like an icon – here they get two of them.

The KL tower comes complete with spectacular views, the revolving restaurant that creates at least one “where’s my handbag gone” incident every evening – it’s usually on the window sill at the other side of the room by the time you have finished the post-dinner Tiger beer).

The Towers visit brings you to the viewing deck on the 38th floor between them, giving the viewer a unique feeling of being suspended above with KL spreadeagled below.

This is a strange place to have such a built environment. The place is still true to its marshy heritage, and still floods in monsoon season. The rivers are, by necessity, filled with concrete culverts and drains. The two rivers that gave the city its name are now almost peripheral to the landscape, but they remind us all of their existence every rainy season.

The swamp is buried under a city whose frenzied activity belies the heat, as market stalls mix it with massive shopping centres.

The gadgets and computer centre is an attraction in itself. Chinatown, with its fake Rolexes and pirate DVDs is best visited in the dark, when the air is filled with bargains struck and tourists being persuaded to pay five times the going price for everything. Everything needs to be argued, even the top end malls expect you to haggle, about 20pc below the going rate. In Chinatown offer one sixth the price and endure the insults. It is worth it in the end.

This is not a longstanding international trading port like  Malacca or Singapore, and therefore has a special charm of its own. In fact Kuala Lumpur has a point to prove exactly because of Singapore. The buildings must be higher, the cosmopolitanism must be more cosmopolitan, the attractions must be more attractive, the traffic more chaotic and the food must be tastier.

The charm of the city is that it is a stopping off point, not just for tourists, but for every aspect of Asian culture, every aspect of the world. It applies to its religion, its culture and most famously to its food, where peninsular Malay cuisine picks up influences from its Indian, Chinese, and European heritage.

The Malaysian side cafes are like pubs in rural Ireland, full of character and eccentricities in their own right, staffed and patronized by characters and eccentrics. The conversations are long and unhurried, and the local delicacies are served with pride.

The slow-cooked works of art served up by the amazing chef John Locke in Precious restaurant in Chinatown look too handsome to eat, but you will be glad when you do.

Go to a spot beside the Petronas Towers for an Indian meal that will knock you out, Dennis Kon’s Le Lanna, Ginger Restaurant in Yap Kwan Seng, due to move to the Central market in march 2008. Even the hotel breakfasts are uniquely Malaysian in an increasingly homogenized foodie world. There are several thousand more restaurants in the city, serving regional specialties from all over Malaysia.

Each has its signature dishes, but what is on the plate is only part of the action. If you go to the top floor of the central market you still see what would pass as a food hall anywhere else, but here is a temple to the art of dining, fast food treated like slow food should be, ordinary families celebrating the indulgence of their taste buds in the humid noon. Even if your plate is empty, stay and watch.

There are temples of all kinds, to the modern commercial world of skyscrapers and high finance, and to the Gods that have been loitering around these river banks for a lot longer.

Chinese temples sit side by side with Hindu ones, the prevalent Muslim culture manifested by abayas and burqas and head scarves, is unthreatened by the hotch potch of Tao, Buddhist and Christian influences.

In Bukit Nanas St John’s Cathedral stands beside the convent and St John’s college which spent most of its history staffed up by energetic Irish De La Salle brothers. At a nearby street corners, taxi drivers take off their shoes to enter a makeshift Chinese temple.

At the Hindu shrine, Baku Caves you have the confluence of nature and spirituality, a chance to go pot holing in dark chambers inhabited by bats and cockroaches, deep past the stalactites into an otherworld of darkness. The main chamber, atop the steps and guarded by Ganesh heads, is in to a Hindu otherworld, scenes from the Bhagavad-Gita in garish colours, lamps and votive offerings, all filling the nooks and crannies in one of nature’s great cathedrals.

It should be ancient, it was discovered just a hundred years ago by an American adventurer. Go back to 1850 and there was nothing in Kuala Lumpur at all. The past is not a foreign country here.

The surprise is that in the midst of this ultra modern city there is something as ancient as it comes. In the district of Bukit Nanas the rain forest has survived from before human times, one of the oldest virgin forests in the region. These residual forest areas are home to a number of fauna species particularly monkeys, tree shrews, squirrels and birds.

Your correspondent was there for the A1 Grand Prix at Sepang International Circuit in the neighbouring state of Selangor, next to the Kuala Lumpur International Airport.

The circuit is where the Formula One World Championship, the open-wheel auto racing A1 Grand Prix and the Motorcycle Grand Prix

The track is a temple of its own, to the worship of speed and modernity, the Asia of the future. The smell of burning rubber and the whine of high power engines are as at home here.

Like the myriad cultures that have swept through Malaysia’s capital, at breakneck pace in the 150 years of the city’s existence, it has brought another dimension.

The muddy rivers still flow through. It is as if there is no time for the mud to settle.

Bukit Nanas Forest Reserve can be reached on the Monorail. A guided walk takes you through the ancient forest.

The National Museum along the Mahameru Highway offers various types of collection such as artifacts and paintings collected throughout the country.

The Islamic Arts Museum houses more than seven thousand artifacts as well as an exceptional library of Islamic-art books is located at Jalan Lembah Perdana next to the National Mosque.

The premier performing arts venue is the Petronas Philharmonic Hall, check locally for concerts, you can’t miss it at the base of the Petronas Towers.

There are excursions to the Batu Caves, a limestone hill in the Gombak district, north of Kuala Lumpur, which has a series of caves and Hindu cave temples.