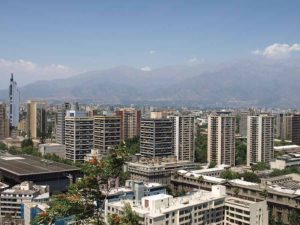 The Spanish Conquistadors first picked out an airy valley high in the Andes 70 miles from the coast and, 500 years later, you can see why.

Santiago, the capital of Chile is a delightful place, airy, safe and surrounded by stupendous beauty. In winter the mountains fill with snow, in summer they just tower above the skyline.

To view the place head up. There is a funicular and a gondola service to the mountain tops. And in the heart of the city a volcano core that serves as a small green park near St Lucia station on the metro. The climb is steep on uneven steps, but whatever breath you have will be taken away by the view of the city receding in to the mountains.

Then the centre — the palm trees lined the main square around the cathedral, a low cluster of teeming city life and pedestrianised streets that contrast with the high rise business skyline beyond.

The jewel of the city is the Bella Vista area, a Bohemian area north of the culverted river which traverses the city. Here amid the plaza culture of street cafes and bars you can come across restaurants such as the iconic Como agua para chocolat.

READ  How much do you know about Asia Pacific? Join the new online quiz nights for travel agents and test your knowledge

The name is inspired by Mexican author Laura Esquivel’s book Like water for chocolate, and the building is in the style of a Mexican ranch, with wrought iron railings on the balconies and plenty of wood, stone and exposed bricks.

The menu of aphrodisiacs and an array of succulent dishes in chocolate sauce are explained by the title, a metaphor for a state of passion or sexual arousal common across Latin America, as well as the title for the famous book and Alfonso Arau’s award winning Mexican movie.

In the late summer light you can relax amid the solid wood tables, musical instruments and oil lamps, and adjourn to the lively jazz clubs afterwards.

A short taxi ride away in the El Golf business and hotel district, Martin Flannery from Bohermore in Mayo runs the city’s best known Irish bar. It is a centre for the couple of dozen people who make up the non religious ex-pat community in Ireland.

With Dell Taylor he is also a partner in two of the district’s best known restaurants, Café Melba, which opened in 1997, and Akarana across the square from Santiago’s Ritz Carlton Hotel.

A former Fyffes executive, Martin has seen the city transformed in recent years into a tourist capital which people describe as a cleaner and more airy Buenos Aires – traditionally regarded as the most European of South American cities.

Like Buenos Aires, Santiago has a large Italian community, and the contradiction is that out of its traumatic recent history under the Pinochet dictatorship, the city enjoyed a stability which enabled it to grow as a tourist attraction.

Safe streets, thriving restaurants, lively bars and the absence of seediness and squalor have made this one of the musts-tops for people on the way to the regions other signature attractions, Atacama, Easter Island, Patagonia, or your correspondent’s ultimate destination, the Antarctic.

Take a peek into the city centre museums to get a sense of exactly how old this culture is. Chile’s mummies are 2,000 years older than Egypt’s. The small archaeological museum has one, and samples of ancient pottery from the vast and narrow country. The museum of pre-Columbian civilization has gathered objects from all over the continent, giving you a sense of the diverse and amazing cultures that extended from Patagonia to Cancun.

The exhibits are small, the temporary exhibitions eclectic and occasionally hilarious such as the current sex and power in ancient South America. Stop by just to see the jugs used by diviners and magicians that are in the shape of a fat man with a penis spout.

The smaller and more disorganised collection in the national museum takes care of events from the arrival of the Spaniards, the adaptation of Catholicism and Chilean history up to the death of Allende on September 11th 1973.

Walk into an upstairs gallery and you are confronted by an enormous painting of their liberator, Bernardo O’Higgins, looking for all the world like an early 19th century Joe Cuddy. Bernardo used his maternal surname until his father, the Sligo born Ambrosio O’Higgins died leaving him an estate and the legacy of Spanish governor of Peru. Bernardo joined the other side, drove out the Spaniards and has streets and monuments all over the city named in his honour.

When they ask where you come from, the instant answer is Tierra Bernardo O’Higgins. The city is also festooned with monuments to another one  of his colleagues, Juan MacKenna from Clogher, Co Tyrone, a nephew of Count Alejandro O’Reilly  – who has a street in Havana named in his honour. For the extraordinary career of both, the National Museum has a good series of exhibits, as well as the manacles of Carrera, who killed MacKenna in a duel. The notice boards are not available in English but you will get the picture.