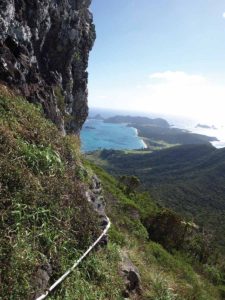 Go feed the fishes sounds like a line from a bad 1970s gangster movie. But that is what I am sent to do as soon as my little Qantaslink dash-eight turbo prop has touched down on Lord Howe Island, a piece of Volcanic leftover plonked in the middle of the Pacific.

I am handed a little bag of bread and a bicycle and off I go along the palm-lined roadways on my unusual quest.

The destination is Ned King’s beach, named for the oldest exporter of the Kentia palm seed industry, on which the economy of Lord Howe Island was founded before tourism.

The island has a population of 339 and a cap of 400 visitors at any one time, and at the end of the two kilometre cycle I already feel I know half of them. The beach is spectacular, with a small smattering of sunbathers and surfers and azure blue water tossing in the Tasman Sea wind.

“No fishing” says the sign. I wonder is there an underwater one for the fishes saying “no humaning”. Should I be worried?

It took less that two minutes to see the fish, big looming shapes just under the surface, moving predatively like extras from another 1970s movie, the one about the sharks. 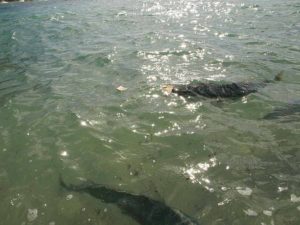 They rise to snatch the pieces of bread on the surface of the ware and then, I take the destiny of my fingertips in, er um, my hands, and hold a piece out for one to eat. He doesn’t see it, but another one three times his size has come from the other direction and yanked it away with uncomfortable haste.

It is an exhilarating experience, and it has to be said, a slightly intimidating one. The Kingfish have no teeth I am assured. Later I am shown a scar, akin to carpet burn, that one of my fellow guests suffered when the shard of the fishes mouth passed too close to her hand.

Later that night the main course is Kingfish, presumably obtained from the other side of the island.

I shed a tear and mourn the loss of a relative of a new friend for about twenty seconds, before I tuck in.

People really need to know how much there is to do here,” Lauren Gatherer and Julie Bretnall from the island tourism association say. “People look at the map and see this small island and think that a week will be long enough. They are wrong.”

Visitors can take a week to pace down from the hubbub of life in the great world outside Here, 660km off the Australian mainland, 600km from Norfolk Island and 1900km from New Zealand, the outside world seems far away indeed.

You can see what they mean. There is no mobile phone coverage. The honour bar from my hotel is on the far side of a public road, alongside the beach. The lead story in the Lord Howe Island newsletter is about a man who bogged his Ute in the golf course, borrowed the golf course Ute to get it out (presumably with the keys still in the ignition), then got that bogged down too. The one man island police force is investigating whether he acted alone.

The fresh air and unobstructed Pacific winds clear your head. Each of the eleven beaches leads to another. A wind change can turn the placid ones into a stormy surf-bearing vortex. One side has a lagoon, with the world’s southern most coral reef (latitude 31 degrees) lying temptingly a few dozen metres offshore.  In distance from the shore, the reef is more Mauritius than Great Barrier.

Snorkelling and diving are cheaper here than Queensland, the queues are short, and because of the visitor cap everyone here is family anyway.

Inland the walking trails spread off in all directions and are well maintained. They have plank walks to protect the most delicate parts of the forest floor.  Atop the gentle Transit Hill there is a viewing platform that takes you to the treetops, where jet black currawongs glare at you with suspicious beady yellow eyes.

On the strenuous climbs they will provide rope to help you across the rock faces and the steeper forest paths.

Jack Shick’s guided walk will take you up Mount Gower, a spectacular volcanic cone which looms straight up out of the sea and gives the impression, like Teide in Tenerife, of being higher than its 875m/2,840 feet would suggest.

The Goathouse is a cave shelf on the adjoining peak, Mount Lidgbird (2504 feet) where you creep around the corer to see the ocean beyond. And there, 9km offshore is one of the greatest sights on the planet, the so-called Balls pyramid, a volcanic core that is the world’s highest sea stack, rising 1,816 feet sheer from the Pacific.

The website for Lord Howe Island claims that this is the most beautiful island in the Pacific. It may or may not be true but when you reach the place it has a habit of taking away the desire to look any further.

Up here you get drunk on the beauty of the mountainside.

One wonders what the place was like when 25-year old Waterford born Margaret Curry and her husband arrived in the pint sized 48 foot cutter Rover’s Bride, in July 1842, swelling the population of the island from 9 to 11 and founding a dynasty that is now hosting me.

Another Irishman George Massy Kirby from Limerick married in to the family three generations ago. The family attribute their gregarious manner to their ancestry.

I know most of my fellow guests already, because high winds forced the aircraft to return for an unscheduled overnight in Sydney after making the two hour journey across the Tasman Sea.

It offers the sort of camaraderie that people remember from youth hostels as that certain stage of their lives. Flashbackers, as the footstepping backpackers are called, would love it here.

As the sun begins to drop into the sea beyond the reef Clive Wilson is talking pigs, rats and birds. He shrieks at the cliffs and the birds respond in their thousands, coming down to see who is in distress. First there are dozens of wideawakes, then hundreds then thousands, flapping away into the low light.

The early sailors released feral pigs on the island to serve as food for future mariners, and it took a major cull in 1982 to get rid of them. The birdlife and indigenous plant life has been creeping back since then. Cats are not allowed. The rats, which arrived from a sinking ship in 1918, remain the greatest nuisance, and a debate rages about whether they should be removed with a major one-off dose of poison. “It is frustrating,” Clive says. “Islanders are most affected by this, and are opposed to this by a 2 to 1 majority but seem to have no power to influence this decision,”

He recalls with pride his own involvement with the island’s biggest ecological success, the revival of the woodhen from near extinction. They now have eighty mating pairs since the island was depigged.

The island got UNESCO world heritage status in 1982. This was not without its problems. The islanders lost well-managed fishing zones. Even feeding the fish was questioned, though allowed to continue with a limit of 300 grams per person. But it gives it a unique status and places it back in the heart of the eco tourism sector.

Nobody questions the listing now. Lord Howe is a place where nature is always close, fittingly for a place where the sound of the sea that can be heard from every point on the island.

The only way you can find fast food on Lord Howe Island is if you are a kingfish on Ned’s Beach.

Long may it remain so.