Trending
You are at:Home»Aviation»The fight against Flight Shame: Europe’s airlines campaign for Single European Sky has become an environmental issue 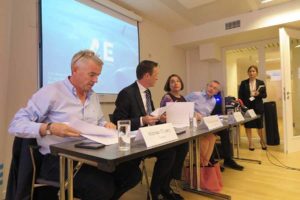 Aviation lobby group Airlines4Europe stepped up its campaign for single European Sky at a briefing in brussels ahead of the arrival of a new European Commission in the city.

It is not yet clear if the new Commission, expected to be headed by Ursula von der Leyen, will have a transport commissioner to succeed Violeta Bulc or whether transport will be integrated with industry (Dick Burke served as Transport Commissioner 1977-81).

A4E has been campaign for Single European Sky to help tackle airspace inefficiency and strike action since its foundation in 2017. This summer , on the urgings of Ryanair CEO and chairman of A4E Michael O’Leary, it added an environmental dimension to its campaign, claiming that the Single European Sky would be good for the environment as well.

In a speech to the guests at an after-conference event, Michael O’Leary summed up the main arguments. “This is an important time for A4E and for the cooperation from Europe’s airlines. We are facing into a new EU commission. As an industry we under significant criticism most notably on the environmental front despite the extraordinary work we are doing as an industry to environmental footprint. Low fare air travel has been one of the great successes of the European Union.

We campaigned actively in the Brexit referendum two years ago. People asked what has Europe ever done for us?Low fare air travel and roaming charges. This is one of the great successes of the European single market. There are challenges. You are all gone on holidays next week.

Probably 30pc of you will have your flight disrupted because air traffic controls will not show up for work in Germany, France or Maastricht. Particularly if they are concerned about the environment. One of the is to get rid of the air traffic control delays, which we think will reduce our emissions by about 10poc.

There are other challenges. Taxation. Europe’s airlines are paying €5bn in ETS and direct environmental taxes. in the case of Ryanair last year it was €540m. this year it will rise to €630m. Yet today the French, following the lead of the Dutch, are proposing to levy even more taxes on our customers. We cannot have this double taxation, in an industry that accounts for just 2pc of Europe’s carbon emissions and will spend €200bn in the next ten years investing in new aircraft and new engines to minimise our environmental footprint.

Willie Walsh, CEO of IAG, said “redesign into an integrated European air space would reduce emissions by 10pc, or 18m tonnes of carbon dioxide saved every year. It would mean shorter routings, shorter journeys, quicker journeys and lower costs and lower fuel emission. It would save emissions by implementing Single European Sky. We could do it tomorrow. Yet politicians have been discussing this issue for 18 years. It is now time for action.”

A written statement from A4E says: Europe’s biggest airlines will pay €5bn in national environmental taxes and other payments this year,  funds which could have otherwise been dedicated to support the industry’s decarbonisation efforts. This includes €590m in expected payments to the EU’s Emissions Trading Scheme (up +59pc on 2018) which airlines have been a part of since 2013. Aviation is currently the only transport sector which participates in the ETS.

CEO of Brussel Airlines, Christina Foerster pointed out that the voluntary offset was not being taken up by more passengers and remained at 2pc, which suggested the issue was not as important to passengers as people think.

In reply to questions from the media as to how aviation was losing the debate to the flight shame movement, Thomas Reynhaert Airlines4Europe MD said A4E was focusing its attention on the new EU Commission.

This reply was not strident enough for Michael O’Leary, who then took the running by claiming that aviation was not losing the debate and said that he saw little support for flight shame movement.

“If you look across Europe today, more and more people are flying. They are flying on more environmentally sustainable aircraft. We have two choices if you live on an island, you can be shamed into flying or you are stuck on the island.  One thing we keep coming back to is the lack of competitiveness in Europe, the high youth unemployment rates, particularly in the Mediterranean countries, they cannot all be brain surgeons or IT makers. So let’s start with tourism because it is one way of creating jobs in those regions, immediately. We are sensitive to the that we are getting a free ride on the environment because frankly it is not true. We have a very good case to push back against those NGOs like the Flight Shame movement because this is an industry that is performing remarkably well and meeting its obligations to a greener cleaner planet, certainly in Europe.”

Willie Walsh said aviation is still the only industry that has got together to agree an environmental scheme at an industry level. “IATA has been central in progressing a global solution to what is a global issue in the development of CORSIA. CORSIA is a very good step and everybody who is involved is agreed that it will evolve over time.”

Michael O’Leary instanced the fact that road transport is growing at three times the rate of aviation and shipping was responsible for more carbon emissions.

Willie Walsh said that the argument was difficult because some people don’t want to listen to the facts about aviation in environment debate.

Willie Walsh said it was “a scandal” that airlines are investing billions while ATC still use 1940s equipment. “We have invested billions in new equipment that enables us to fly anywhere from point A to point B without any reference to ground based equipment. We are still flying airways that were designed in the 1940s and 1950s when you had to use land-based equipment for navigation.”

Thomas Reynaert also said ATC technologies are not being deployed

Michael O’Leary raised the point that “airlines are obliged to pay compensation and right of care to our passengers for these delays. Notionally the legislation says we can recover those costs from the NSP. But in almost every EU country the NSP is immune to legal action and prosecution. Not only are we and our customers suffering these enormous and unjustified delays. We are having to pay out huge amounts of money in right to care and, in some cases, compensation costs to our customers because these NSP providers fail to show up for work on Saturdays and Sundays.

Christina Foerster said structural issues in European airspace, bad as they are, are compounded by strikes. And often very short term strike actions. “Last year the majority of the strikes were in France in Marseilles, often on the weekends often without people having idea of what they want to stop the strikes, and really impacting on people who wanted to fly on holiday, which is not how you want to start the holiday. She pointed out that weather delays had increased dramatically and that most of the so called weather delays occurred at weekends in june and July in Marseilles..

Thomas Reynaert said air traffic management is dysfunctional. It is an opportunity for the new EU commission and new European parliament to finally start working on a single European sky. It is possible. We know exactly what needs to be done. Now the commission needs to put it into a new regulation. “In the absence of competition amongst NSPs, which is unfortunately an impossibility, it would establish an independent economic regulator. We already have the tools where it is needed to fix our inefficient airspace for once and for all. All the stake holders have been sitting around the table for the past twelve months, whether it is Eurocontrol. The airlines are not the managers of the service. It is the NSPs. The NSPs are failing to provide service at an affordable cost.”

Michael O’Leary said “more aviation taxes are a knee-jerk reaction that will undermine European competitiveness and particularly hurt the integration and free movement of EU citizens, especially for peripheral and island Member States such as Ireland, Spain, Portugal and the Baltic States.”

Thomas Reynaert argued that the main opposition to the Single European Sky project was the naiotnal interests of member states.

Christina Foerster outlined the impact of ATC strikes in Belgium, which has surpassed France for strikes in 2019.

Willie Walsh said Eurocontrol, which is headed up by Eamonn Brennan, was predicting that ATC delays were going to increase seven fold unless staff shortages were addressed.

Christina Foerster outlined the expensive moves by the Lufthansa Group to minimise the impact of ATC strikes, including keeping 37 spare aircraft across Europe, compared with 15 in 2018.

Willie Walsh gave an example of how 1.4 tonnes of extra fuel is burned on the Madrid to Florence route due to an ATC strike.

Michael O’Leary and Willie Walsh answered questions about aviation and Brexit saying that the future of aviation to and from the island of Britain was still uncertain.

He said that the situation had improved at El Prat.

The event was not without its light hearted moments. Michael O’Leary told Christina Foerster  that “Belgium is almost France” in one microphone handover.

Michael O’leary summarised the issues in a light hearted speech during the after-conference outdoor event.

Video of briefing in full.