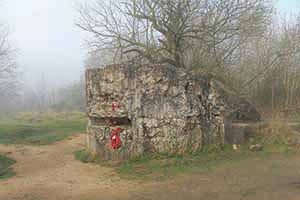 A hundred years later, a biker still stands to attention

Tilling the arable plains of Flanders throws up an unwanted second harvest for local farmers each year.

They call it the Iron Harvest, old munition, shells, grenades and bullets which are uncovered during ploughing and harvesting in the  tillage land surrounding Ypres (or the more pronounceable Ieper in Flemish), where much of the fighting in World War One was concentrated. An estimated 300 million shells and grenades were launched in the Ypres Salient, and many of them never exploded, and have yet to be recovered.

It’s a reminder of the enormity of war, a heritage that is only a family memory or a page in history for those of us who do not live with it.

For the Flemish, it’s a daily and sometimes dangerous part of their lives. Their war still continues.

The Belgian government ordered that all tillage land was to be ploughed a metre deep after the war, to avoid trouble, but the larger machinery of modern farming is helping to bring more material to the surface.

Flemish farmers who find munition move it to the side of the road, leaving it for the Belgian army bomb squad to pick up on its regular rounds. Sometimes it is just a shell or two, but at the beginning of March, a farmer near Paschendaele made a spectacular uncovery of several hundred deadly mustard gas cannisters. His farm was cordoned off until the bomb squad could make it safe again. Since then, construction workers were killed by exploding WWI munition in Ypres. 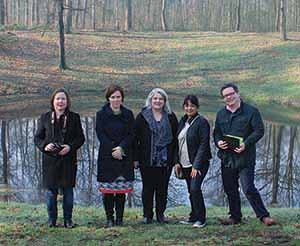 Picture shows the group of Irish journalists who visited the Flanders battlefields in advance of the centenary of the outbreak of WW1: Sheena Davitt of the Daily Mail, Clodagh Finn of the Examiner, Ida Milne of Travel Extra, Anita Rampall of Visit Flanders, and Ronan McGreevy of the Irish TImes at Caterpillar crater, on Hill 60, which shows the impact of the war on the landscape.

Today, battle tourism is a significant employer around Ypres and the  local other towns whose history is forever linked to this incredible war.

As a visitor experience, it’s perhaps oddly attractive, tasteful and informative, dealing with the awesome sadness that is a perpetual companion of WWI. The visitor moves between museums, battlegrounds still dented from the blasts, and the ubiquitous graveyards. The Belgians have maintained a great respect for the foreign soldiers who died on their soil, Allied and German.

Local tourism interests are gearing up to tackle the hoped-for influx of visitors for several hundredth anniversaries. Most of those who come have a family connection. The interest from local history groups and schools in Ireland is already substantial, and Flemish tourism organisations are keen to make sure that they experience quality audience-specific visits.

At the heart of the Irish-focus war experience is a small group of highly trained guides who have an astute knowledge not only of Irish soldiering, but also of the political and social dimensions to the Irish participation in this ‘war for the freedom of small nations.’ They tailor group visits to the battle fields and other sites, trying to find things of particular interest to the groups. 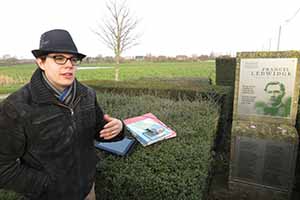 The Irish specialist for our trip is Simon Louagie, who grew up in the area; it’s more than a job to him, it’s a way of life.

He produces facts and stories almost as though he was pulling them straight out of a scene from 100 years ago, fresh from battle. Taking us through a newly-sown cornfield on the Messines battlefield, he swoops on a patch of slightly redder soil, the sign of Iron Harvest booty, and after a few moments’ digging, produces a piece of shrapnel we eagerly collect. A primary source, straight from the battlefield. We can only imagine the excitement of school groups in the same situation.

My granduncle, Royal Army Medical Corps doctor Captain King Elmes from Old Ross, died in Flanders at the age of 25.

Simon gives me a glimpse of his war, following the London Regiment he served with. I wonder did he cross this same field, under rather different circumstances, when the air was thick with smoke and gunfire, the bangs and blasts and cries and smells and fears of war. He was doing his job tending the wounded and dying, when he too was killed by a shell at the end of September 1918. So close to Armistice Day, so nearly home safe to his family; my grandmother named her first-born son after him ten months later. She never spoke of the loss of her beloved brother. The pain must have been too intense.

Uncle King’s body lies in Kandahar Farm, one of those pretty resting places for the Allied fallen plentiful on the modern landscape, their graves marked with white Portland stone by the War Graves Commission.

There are fewer German graveyards, as more German soldiers’ remains were repatriated. Most of the graveyards are small as soldiers were buried near where they fell, fixing evidence of their story forever into the landscape. Each life lost, another desolate family, more dreams unachieved, but the marking helps.

The renovated interactive museum, In Flanders Fields, located in the centre of Ieper, explores the personal experience of war, trying to enable visitors to see the war through the eyes of soldiers, nurses and doctors, stretcher-bearers and the few locals who remained. Their stories are told through touchscreens, video projections and soundscapes to create an intense experience for the visitor.

Visitors are given an interactive Poppy bracelet to wear as they enter. The visitor uploads a screen with information about themselves – where they come from, their age, and interests – and at various places in the museum they press the bracelet against the screen to produce matched information.

For me, coming from Wexford, it kept producing details about the war experiences of Major Willie Redmond, the Irish Parliamentary Party MP from Ballytrent who was fatally wounded at Wijtschate during the Battle of Messines. Most of the story focuses on Redmond’s  age and unfitness for battle, but the detail surprises me. Redmond’s presence and death made a bigger local impact than I would have thought. He’s a sort of war celebrity in Flanders.

The museum has a particularly moving film exhibition about the traumas suffered by the soldiers, told through the writings of American neurosurgeon Harvey Cushing and nurses. 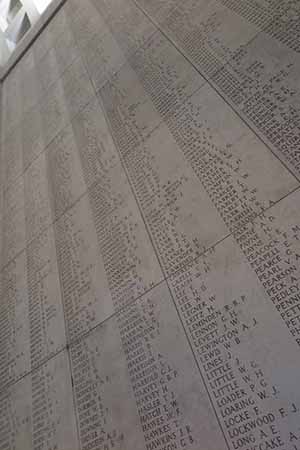 The battlefields are still essentially rural, and the towns – completely rebuilt after the war – seem small for the impact their names have had on our lives.

Paschendaele, Messines, Ypres. Paschendaele is so tiny that it was considered too small to house the museum commemorating the battles which took the lives of around 500,000 Allied and German troops, over a period of 100 days. The Paschendaele museum is located instead in the grounds of a chateau in Zonnebeke.

Ieper itself feels like about the size of Enniscorthy; the very smallness and ordinariness of the town brings home the impact that the war must have had on the locals. Most took flight, travelling to Brittany, the United Kingdom, and some to Ireland. About 3,000 Belgian refugees came here, housed in various locations, including Celbridge and Dunshaughlin workshouses.

Some remarkable characters braved it out. Madame Tack, an octogenarian, refused to leave, insisting on staying in her house, an isolated civilian in the heart of the arena of war, and provided lodgings for visiting kings and queens who came to see firsthand what was going on. She voyaged beyond the battlegrounds to get provisions, on her donkey, and brought back chocolate and other goods to sell to the soldiers. The donkey’s nocturnal brayings disturbed the soldiers’ precious sleep, and eventually the temptation of available ordnance proved too much.

The Menin Gate in Ieper marks the deaths of British and commonwealth soldiers who died in the Ypres salient, but whose graves are unknown.

It felt slightly odd, visiting this tomb so revered by our domestic enemy, but the unease evaporated looking at the lists of names of the Irish soldiers lost etched on an outer wall of the memorial, alongside those of the Welsh and the Scots. Their deaths in war tied them into a cause, a statistic for historians, and prevented a later opportunity to explain what motivated them to fight, or to deny the interpretations others put on it.

At 8pm each evening, crowds gather to commemorate the fallen, in a simple but moving ceremony. Traffic through the gate is stopped, members of the local fire brigade play the Last Post, and visitors lay wreaths to remember their dead.

It is perhaps a fitting end to a trip to the WWI battlefields, we take away a reminder of the long-lasting trauma of all wars,  and the absence of futures.