Trending
You are at:Home»Aviation»Heathrow returns to normal after runway protesters cause traffic backlog

Traffic at London’s Heathrow Airport after a protest over plans for a third runway at Europe’s busiest hub caused a massive backlog at the main approach tunnel. Three cars were parked across the road, with protesters chaining themselves to one of the vehicles during the morning rush hour. 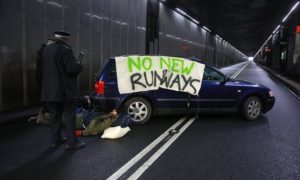 Photo by Rising Up campaigners of protest at Heathrow Airport

The tunnel, which accesses Terminals 2 and 3, was shut for more than two hours while the M4 spur road was also temporarily closed. The airport said traffic has returned to normal but further updates can be found here.

The tunnel is the main access to Terminals 2 and 3, used by mainly long-haul airlines including Virgin, United, Delta, Emirates, Air Canada, Singapore Airlines and British Airways.

The disruption had caused widespread delays, as traffic was diverted to the outbound tunnel at the airport. The Rising Up campaign group said it was protesting against the impact a proposed third runway could have on climate change and the local area.

Heathrow Airport said: “Heathrow supports the right to peaceful protest within the law, but the safety and security of our passengers, aircraft and colleagues together with the smooth running of the operation is paramount.”

A recent poll by English-based ComRes revealed that more than two-thirds of people in Britain believe that a third runway at London Heathrow Airport would help the country compete in the global economy.