Trending
You are at:Home»Aviation»Howzat! Irish cricket bowled over as Turkish Airlines comes onboard as headline sponsor

Turkish Airlines has followed up its high profile sponsorship of sports, including Barcelona FC, hockey and European Cup rugby with the announcement that it is to sponsor Irish cricket.

The deal, initially for one year, will see Turkish Airlines sponsor the senior men’s squad for one, with the option to extend the deal until 2020. Warren Deutrom, CEO of Cricket Ireland, revealed that Ireland could join the big boys as a Test cricket nation by this June 22. Cricket Ireland’s Commercial Director, Dennis Cousins, said the body was “already in discussions” with the airline about extending the deal. 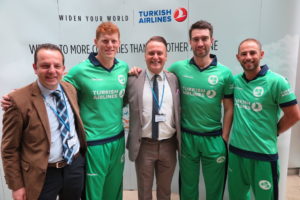 Cousins said Turkish Airlines is “a brand that values the value and reach of sport” and operates “in territories where Ireland ply our trade” and is “a world leader and iconic brand”.

Hasan Mutlu, General Manager of Turkish Airlines in Ireland, said: “Turkish Airlines, the airline that flies to more countries than any other airline, this year celebrates its 10th year in Ireland and will continue this growing presence in the region with its commitment and support for Irish sport.” Connect to the full album here on facebook.

Irish international Ed Joyce said the team has two reasons to celebrate – with the sponsorship deal and the lure of Ireland becoming a Test cricket nation, keeping our best players at home. “It’s beyond our wildest dreams. It’d be amazing to play a Test match for Ireland.”

Ireland take on England at Lord’s on May 7, and international player Kevin O’Brien said: “London is a once in a lifetime opportunity and you have to embrace the fact you’ll be playing in front of 28,000 people at Lord’s.”