Trending
You are at:Home»Aviation»Icelandair to increase Dublin-Reyjkjavik frequency to 10w from May

Icelandair is increasing its number of flights from Dublin Airport to Reykjavik Keflavik from daily to ten flights a week from Thursday. May 16 next. 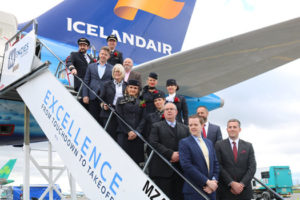 Pilots, Icelandair CFO Bogi Nils Bogason with Paul O’Kane of the DAA (back row) at the launch of Icelandair’s route from Dublin to Reykjavik, May 8, 2018

Andrés Jónsson Icelandair Director for Britain, Ireland and Continental Europe said: “Our Dublin route has been operating for nearly a year now and our Icelandair service is proving to be very well received, as such we are delighted to be able to increase frequencies on this route.”

The new flights will run until September 7 next when they will reduce back to a daily frequency.