Trending
You are at:Home»Travelextras»Ireland reigns in Spain, but Brexit clouds continue – Shane Ross and Tourism Ireland

Britain continues to be the worry as Tourism Ireland announced its midyear review at its headquarters in Dublin. Overall visitor numbers in the first half of the year rose 4.2pc, with the biggest growth coming from Spain, which is now on course to become our fifth biggest inbound market.

Tourism Ireland CEO Niall Gibbons said “Spain has shown amazing resilience over the past few year. It has catapulted itself up to fifth place.” 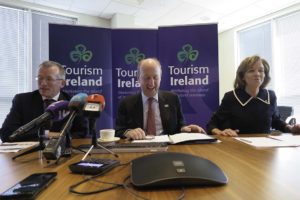 Tourism Minister Shane Ross said the British figures “are a concern, but not a surprise”. He added: “I’ll be endeavouring to keep the lower VAT rate for the tourist industry” in the upcoming budget. But he warned that due to the fall in the value of sterling, “there is no doubt that competitiveness in our tourism industry is vital at this time”. But he warned that he’s watching the upper end of the market, particularly in Dublin, where a lack of room supply and a growth in inbound tourism has pushed up prices: “I think there is cause for concern at the top making large profits and we have to watch that very very closely.”

Niall Gibbons said North America, with growth of 21.6pc already this year, would overtake Britain in terms of revenue if trends continue. He said the North has also taken a Brexit hit, with seat numbers into its airports down 8pc this year.

He said Tourism Ireland would be ramping up its campaigns in other markets, and would launch promotional blitzes on the back of the latest Star Wars movie, which again showcases the Co Kerry coastline.