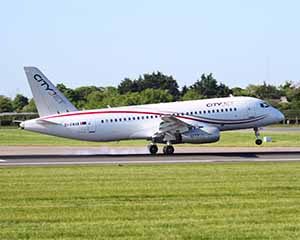 Ireland manager, Martin O’ Neill, assistant manager, Roy Keane, 23 squad members and back up team were flown on Tuesday by CityJet, the Official Airline Partner of the Football Association of Ireland, to Le Bourget Airport, most famous because it serves as venue to the Paris Air Show. 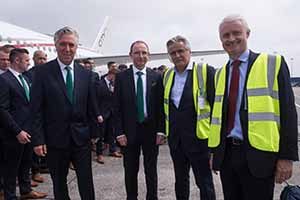 CityJet Executive Chairman, Pat Byrne, said: “It has been a privilege to carry the hopes of the nation to Paris and fingers crossed it will be some time before we make the return journey with the team. They have everyone’s best wishes in the championships.”

“We were delighted to have the opportunity to come on board as official airline to the FAI in March and we look forward to working with the FAI as their ongoing partner following Euro16. CityJet is a pan-European airline with services across the continent, ranging from the Nordic regions down to Italy and a major operation in France, so it is wonderful working with the FAI at a time when the world of football focuses on Europe.”

The Superjet SSJ100 is one of three the airline welcomes to its fleet this year and first arrived in Dublin last Thursday. The flight conveying the team to Paris was its first scheduled flight in CityJet colours.

The team will be based in Paris for its opening group fixtures in Paris (June 13 v Sweden), Bordeaux (June 18 v Belgium) and Lille (June 22 v Italy) and longer, should it progress to the round of 16 and further.