Trending
You are at:Home»Afloat»Irish, French and Spanish combine to celebrate 40 years of Brittany Ferries in Cork

Brittany Ferries has celebrated 40 years of linking Ireland to France at a multinational event held in Cork, attended by Port of Cork Chairman John Mullins, French Ambassador to Ireland Stéphane Crouzat, Brittany Ferries CEO Christophe Mathieu, and Jamie Gonzalez, President of the Port of Santander.
In May 1978 Brittany Ferries launched the Cork-Roscoff ferry route from Cork City Quays with its flagship MV ‘Armorique’. At the time, all ferries departing Cork used the passenger terminal at Tivoli, before being transferred downriver to the dedicated Ringaskiddy Ferry Terminal which opened in 1982. 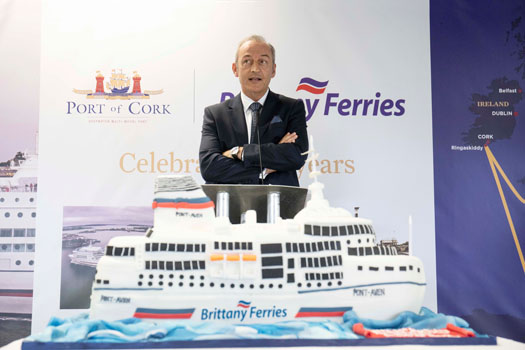 “This company has shown true dedication in providing a reliable and attractive ferry service for both passengers and freight,” said Port of Cork Chairman John Mullins. “On behalf of the Port of Cork I would like congratulate Brittany Ferries on the last the 40 years’ service and wish them every success for the next 40 years.”
Earlier this year Brittany Ferries announced the first ever ferry service linking Ireland and Spain, with the new Ro-Pax twice weekly service from Cork to Santander. As well as serving Cork to Santander, this route also delivers an additional weekly return-sailing from Cork to Roscoff.
The new service also allows freight carriers and passengers to bypass Britain to Spain as Brexit uncertainty continues. In 2017, Brittany Ferries in Ireland carried more than 87,000 passengers, which was an increase of 4pc on the previous season.
While France continues to be a popular travel destination for Irish travellers, the number of French people visiting Ireland also remains high – as nearly 45,000 used the route last year, 52pc of all passengers carried.
See more pictures here or connect to the album on Facebook.