Trending
You are at:Home»Ireland inbound»Irish hospitality industry in shock as Minister Donohoe hikes VAT rate to 13.5pc as Brexit looms 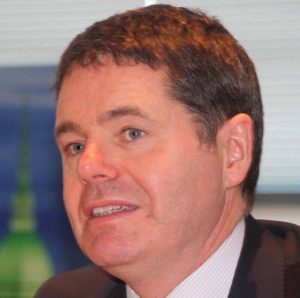 Ireland’s finance minister Paschal Donohoe succumbed to pressure from Department of Finance officials and ignored lobbying by the hospitality industry in raising the VAT rate for hotels and restaurants from 9pc to 13.5pc from January 1 2019.

The measure was introduced as a temporary measure for 18 months in 2011, but has been repeatedly criticised by Department officials. In raising the rate the Minister estimated that it will raise €466m. Research from the RAI and IHF estimate that the closures and reduced income will mean that the 13.5pc VAT will bring in less than the 9pc rate form the sector.

Minister Donohoe said a review of the rate by his Department showed it had done its job.

He said the allocation of €35m to the Department of Transport, Tourism and Sport will include €4.5m million for regional initiatives such as Ireland’s Hidden Heartlands and the Wild Atlantic Way, and €10m for the further development of greenways. Capital expenditure will include the completion of the runway overlay project at Knock Airport; and the design, planning and implementation of cycling and walking projects around the country.

The budget allocated €110m for Brexit measures across a number of Departments (but not tourism), including funding for essential customs requirements and a range of other targeted measures.

Reaction from Adrian Cummins was swift:

The Restaurants Association of Ireland considers #Budget19 "A thoughtless Budget!" There has been zero regard for the Restaurants Sector particularly rural and border SMEs. The Government has turned its back on Tourism! @adriancummins @PresidentRAI

And from Eoghan O’Mara Walsh:

Vat going up to 13.5% for tourism. How massively disappointing and damaging for Irish tourism which is so important to regional Ireland. #Budget2019

And from Tim Fenn:

Adrian Cummins said “the VAT increase has just cost 5,000 jobs in our businesses – restaurants, cafes and bars serving food. Minister Ross failed to defend us in the negotiations in the Budget.  If VAT increased from 9.5pc to 11pc then we might have given the minister a pass mark.  But we give him zero percent for complete failure and he should now resign. This is a black day for us. In one fell swoop, we have these increases and the arrival of Brexit in March. This is deeply annoying. It will cost the industry €440m next year. It’s a 50pc hike in our VAT bills,”

Fáilte Ireland’s CEO Paul Kelly said: “The Government’s 9pc VAT rate made a positive impact and was very much needed at a time of 15pc unemployment and falling demand. This VAT rate – along with zero Airport Passenger Duty, the creation of Fáilte Ireland’s regional experience brands like the Wild Atlantic Way and Ireland’s Ancient East, strong international marketing of the island of Ireland by Tourism Ireland, as well as the work of a resilient and ambitious industry – have driven significant recovery in volume, revenue and employment across the sector. While we acknowledge the increased VAT rate will be a significant challenge to many industry players, we are still confident about the long-term future growth prospects for the sector.”

Michael Lennon, Irish Hotels Federation President and owner of Westport Woods Hotel in Co Mayo, said the VAT increase was “a joke to the industry. It is not unexpected but we fought hard to try to retain the reduction. It’s a reckless failure to recognise how important we are to the economy, the whole tourism industry. The growth to the economy has been helped by tourism. The reduction of VAT to 9pc has been a great motivating factor. From a competitive stance, there are 26 countries with a lower VAT rate than us.  I’d be asking the tourism minister Shane Ross to go to cabinet and ask them to support our call for deferring the increase for nine months, till the end of the summer season at least. The government needs to be considerate of contracts already in place, particularly tour operators in the UK, Germany and America, which are important markets to the tourism economy. The government had great foresight introducing the VAT reduction. The minister mentioned in his budget speech that there are 240,000 people employed in tourism. Since 2011, 65,000 new jobs have been created by tourism and the minister acknowledges it. We would be asking him to do his job and hold off on the new VAT rise. Another reason we would like to hold off on this increase for another nine months would be so we can see a bit more clarity around Brexit.”

During the debate, Eoghan O’Mara Walsh of ITIC argued that the 9pc VAT rate was about jobs outside of Dublin.

Town v Country. Trade unionist Patricia King told Tim Fenn of the Irish Hotels Federation that the VAT rate was of no benefit to her urban-based members.

And back to the kitchen, where it was becoming very heated indeed: