The Irish Travel Agents Association has joined with European counterparts to call for a level playing field in holiday bonding and introduce measures to protect passengers against airline insolvencies.
The ITAA and The European Travel Agent’s and Tour Operators’ Association argue that after “a record number of airline failures in 2017”. the European Commission must introduce an efficient mechanism to protect EU passengers.
The ITAA is also campaigning for all Irish travel providers to be bonded by the Commission for Aviation Regulation to ensure that passengers are protected from future travel provider collapses. CAR is currently looking into the area, and this week published its latest update.
CAR said 42 parties had provided feedback on the current bonding situation, and reported: “The majority of respondents agreed that the current scheme is not effective. That said, one respondent noted that the current scheme has performed well to date, with the exceptions of Failte Travel and Lowcostholidays.
“However, another stakeholder noted that moving forward the scheme cannot cope with a catastrophic loss against the Travellers’ Protection Fund. Many respondents were of the view that the scheme is no longer effective because it covers no more than 20pc of travel bookings made.”
The ECTAA, of which the ITAA is a member, is calling on the EU to introduce legislation establishing a mandatory mechanism borne by air carriers to protect passengers against airline failure, of which the cost would be included in the ticket price.
Pat Dawson, CEO of the ITAA, told Travel Extra that this small duty “would be one or two euros” on an airline ticket price. “The need is to replenish the hit from Lowcostholidays and would last for one or two years at the most. The fact is that over 85pc of people are not financially protected. We’re looking for a level playing pitch because airlines are the biggest competitors to travel agents.” He said travel agents’ bodies would be challenging the current situation in the courts on the basis that travel agents and tour operators “are providing a service, they [airlines] are providing a service, but we have to pay and they don’t have to pay.” 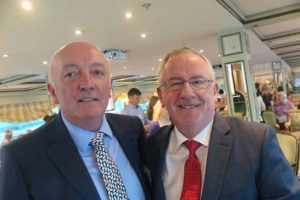 Cormac Meehan and Pat Dawson of the ITAA

New legislation – the Package Holidays Directive – is due on July 1, but Mr Dawson doesn’t expect that date to be hit due to due to political situations like changes of governments around Europe. He added that the ITAA will be requesting meetings with ministers here to level the playing field and saying the “consumer must be covered – 100pc of them”.
The ECTAA said more than a million bookings were affected by Air Berlin, Monarch Airlines and NIKI, all of which ceased trading in 2017. More than 110,000 of Monarch’s passengers were stranded abroad following the sudden announcement; while a further 750,000 people have paid for flights, which they were not able to take. At least 180,000 customers Air Berlin who booked flights that have been cancelled won’t get reimbursed and 410,000 bookings with NIKI (210,000 bookings from travel agents and 200,000 direct bookings) were cancelled.
The ITAA said it has repeatedly called on the Government to review the legislation around bonding among travel providers. Following the collapse of Lowcostholidays in 2016, almost 4,200 Irish customers made claims to CAR, amounting to €3.8m. These claims depleted the Travellers’ Protection Fund, which is made up of contributions from tour operators and administered by the commission, by 75pc as Lowcostholidays’ bonding level was underprovided.
Cormac Meehan, President of the ITAA, added: “The ITAA have been pushing for a collective bond among all travel agents, tour operators and airlines. We are suggesting that a small levy be included in every ticket price to bond airlines and protect consumers. As it stands, 85pc of the travelling public remain unprotected by outdated bonding legislation. We have contacted the Minister for Transport, Tourism and Sport many times about this issue as it will be the Irish taxpayer who will have to pay if there was to be another travel provider collapse in Ireland.  We are now working closely with the ECTAA to try and reform the legislation at EU level.”
Pat Dawson added that there needs to be a pan-European standard of bonding, and cited the case of an Irish couple who booked a trip to Australia with an online travel agent, to find that the booking didn’t exist when they arrived at Dublin Airport, leaving them €4,700 out of pocket.
The following two tabs change content below.