Trending
You are at:Home»Aviation»Irish travellers spared in US border system meltdown

Irish travellers using US preclearance facilities were unaffected by a computer outage which caused massive delays in a number of airports in the US. 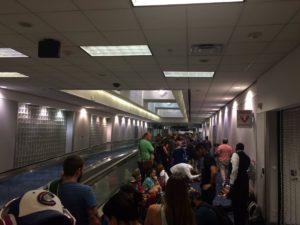 One tweeter posted a picture of long queues in the major hub of Atlanta.

A similar failure  – although shorter in duration – took place in October 2015. US customs officials blamed that incident on problems with the computers and kiosks used by passengers arriving in the country.

America’s CBP said in a tweeted statement that: “All airports are back on line after a temporary outage of processing systems. No indication the disruption was malicious in nature”.