Trending
You are at:Home»Ireland inbound»ITIC: One person in every nine in Ireland works in the Tourist industry 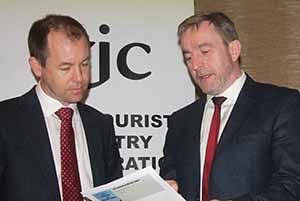 The Irish Tourism Industry Confederation has said that the latest CSO figures show that tourism is Ireland’s largest business employer, accounting for one in nine jobs nationally. 3,400 additional tourism jobs have been created this quarter, with additional visitor attractions like GPO’s Witness History, and Epic Ireland, contributing. 8 million international tourists visited Ireland in 2015, with the industry being worth 7.3 billion to the Irish economy and paying 1.8 billion in taxes.

ITIC says that in the wake of the Brexit referendum, Irish tourism is at a critical time and complacency would be dangerous. Ireland’s largest source of visitors is facing depreciation of its currency and concerns about its economy. The ITIC have called on the government to put a priority on the tourism industry in its pre-budget submission, to invest and retain competitiveness.

Paul Gallagher, Chairman of ITIC “Sustainable growth for tourism in Ireland is predicated on a competitive industry and appropriate long-term government policies and investment strategies. The tourism industry in Ireland has created 40,000 jobs over the past four years. However external factors such as Brexit risk making the trading environment more difficult and very uncertain… The tourism VAT rate at 9pc puts Ireland on an even keel with other EU countries and it is very important that this be  retained in budget 2017. Indeed 17 of the 19 Eurozone countries have tourism VAT rates of 10pc or lower- the current tourism VAT rate is therefore right-sized for Ireland. The benefits need to be felt in all parts of the country and not just urban areas or tourism hotspots. ”

Eoghan O’Mara Walsh, “Tourism is a long-term sustainable source of jobs in Ireland. Tourism can’t be offshored our out-sourced. It is here to stay and has the potential to provide jobs in all parts of the country. However tourism capital investment by the state is very low and not appropriate for a sector that is so important to the economy. For example tourism marketing budgets have been cut year after year and are now €20 million below what they used to be. This is having a serious impact on advertising recall and will mean less visitor numbers in future years if not addressed immediately. “