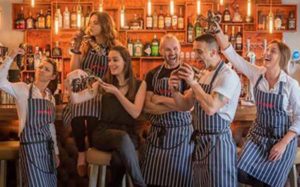 Oliver Dunne, of Bon Appetit in Malahide and Cleaver East, and a Michelin starred chef for seven years, opened Beef and Lobster in Dublin city centre with only four items on the menu.

Its Parliament Street location is around the corner from Cleaver East, Beef and Lobster’s menu accompanied by a high quality beef, wine and cocktails menu.

All mains are €22 and come with two sides, and there is an additional surf n turf option for €35.

The restaurant will be open seven days a week from noon until 11pm at night.

Oliver previously held a MIchelin Star with Bon Appetit from 2008 until 2013. He started his career as commis at Gotham Café in Dublin, went on to work at Peacock Alley, London with chefs such as Gordon Ramsay and Gary Rhodes, Mint (formelry Zucchini) in Ranelagh, and founded Bon Appetit in 2006.

See also  And the winners of the Travel Extra Travel Journalist of the Year Awards 2023 are...