Trending
You are at:Home»Ireland inbound»Kerry's greenway will require CPO from 197 landowners 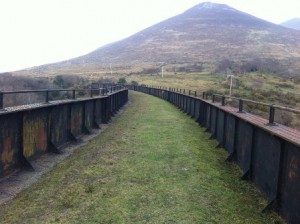 Kerry County Council’s planning application to develop its planned €3,4m 32km Ring of Kerry greenway between Faha near Glenbeigh and Reenard near Cahersiveen on the Iveragh Peninsula will impact on 222 landholdings and 197 landowners. according to council documents.
The three-mile wide paved surface greenway would run parallel to the ring of Kerry along the corridor of the abandoned Great Southern railway line, with off-line sections on adjacent lands and local roads. The project will include the provision of carparks, and the upgrading of some existing bridges and tunnels such as the Cahersiveen Railway Bridge, Gleesk Viaduct (pictured) and tunnels at Drung Hill.
A Compulsory Purchase Order (CPO) notice for the acquisition of the privately-owned lands to allow the council to develop the greenway has been published.  Previous greenways such as the 42km Great Western Greenwayin Mayo and 46km greenway between Waterford and Dungarvan required negotiations with over 100 individual land holders.
At the talking tourism conference in Killarney last November Travel Extra editor Eoghan Corry appealed directly to Minister Brendan Griffin to speed up the planning process for greenways (watch here) as the process was too slow paced to deliver a meaningful product for Irish tourism.
Other greenways that have opened include Ardee to Whitemills, the Boyne Greenway, Carlingford to Omeath Greenway. Grand Canal Cycleway, Great Southern Trail and Royal Canal Way.
Greenways in planning and under construction include Arthurs Way (Leixlip to Oughterard via Celbridge), Ballina to Killala, Boyle to Lough Key Forest Park, Burtonport greenway, Clonmel to Carrick-on-Suir, Connemara Greenway, Déise Greenway (Clonea to Durrow, Co. Waterford), Derry to Muff, Galway to Moycullen, Kilmeaden to Bilberry, Lifford to Strabane, Mullingar to Athlone, Patrickswell to Limerick City, Sutton to Sandycove cyclepath, Tralee to Fenit and West Clare Greenway.
If confirmed by An Bord Pleanála, Kerry County Council said the CPO will allow it to acquire the land necessary for the project.
Kerry County Council has said an Environmental Impact Assessment Report had been included in the planning application.