Trending
You are at:Home»Ireland inbound»Kildare aiming to boost overseas visitors by 2020 on back on Ancient East

Kildare is aiming to capitalise on the success of Ireland’s Ancient East promotion and boost overseas visitors numbers by 25pc over the next three years.

The county is also bidding to increase island of Ireland visitors by 30pc, and grow total visitor revenue by 40pc between now and 2020, supporting the creation of 1,500 direct and indirect jobs in hospitality and tourism. 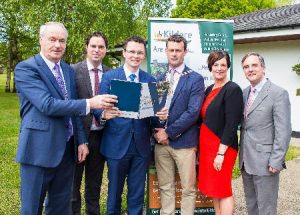 Kildare’s ‘A 2020 Vision’ was launched by Minister of State for Tourism Patrick O’Donovan TD, and the event was attended by County Kildare Fáilte, as well as Jenny De Saules, Head of Ireland’s Ancient East for Fáilte Ireland, members of Kildare County Council, members of the Oireachtas, representatives of the tourism industry and regional agencies.

Speaking at the Irish National Stud launch, Kildare Fáilte said it and industry employers such as Kildare Education Board and other relevant organisations will support existing tourism infrastructure with a very strong investment. This would helpo enhance existing visitor experiences, support the creation of “world class and demand-driven visitor experiences”, stimulate investment in tourism infrastructure across the county, and enhance enhance the skill levels across all tourist sectors. This includes the creation of new jobs, new training, and a county-wide audit to identify skills shortages within hospitality and tourism sectors.

Tony Lenehan, Chairman of County Kildare Fáilte, said: “In developing a forward-thinking strategy for Kildare Tourism, it was widely agreed that we must be vigilant and responsive to the upcoming challenges and implications of Brexit, industry competitiveness, service quality and skills shortages across all sectors of the industry.”

“Kildare’s location, its rich natural heritage, along with its horse racing and golfing attractions, provide many opportunities to attract spin-off tourism from the city region and neighbouring counties, including Wicklow,” said Peter Carey, CEO of Kildare County Council, who was notably thanked for his continued support and funding of County Kildare Fáilte initiatives, and ongoing planning and management of the county’s tourism.

Tony Lenehan said “2016 was a period of sustained growth for Tourism in Kildare, and this provided the confidence and the foundation for the future strategic direction up to 2020. However, we have a lot of hard work to do, in the face of competitive currency shifts, to continue this performance into the future, to increase our market share of international tourists, to sustain the number of jobs and the economic growth that tourism brings to Kildare.”