Trending
You are at:Home»Ireland inbound»Kildare aims to boost visitor numbers by 30pc through Ireland's Ancient East

Kildare is aiming to ramp up visitor numbers to the county on the back of the Ireland’s Ancient East promotion. The county has just installed three new orientation signs for the Ancient East trail, situated at Newbridge Silverware, Burtown House and Maynooth University.
The guides for tourists join those at The National Stud and Japanese Gardens, Kildare Town Heritage Centre, Lullymore Heritage and Discovery Park, and Castletown House. The new signs are part of a multi-signage programme situated in over 100 key sites throughout Ireland’s Ancient East.
“Ireland’s Ancient East is key to Kildare’s ambition to grow visitor revenue by 40pc between now and mid-2020 through the Into Kildare brand,” said County Kildare Tourism Development Manager Aine Mangan. “We aim to increase overseas visitor numbers by 25pc and expand Irish visitors to the county by 30pc.” 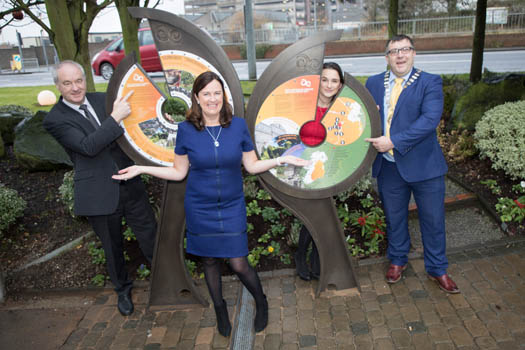 “As well as presenting the Ireland’s Ancient East story, each branded and wheel-shaped sign highlights a wealth of information on interesting things to see and do within an hour’s drive in every direction,” Ms Mangan added.
“The signs will play a large part in encouraging tourists to linger and explore our locality and follow our other touring paths, such as the Sport of Kings, Shackleton and St Brigid’s Trails, as well as experiencing the abundance of other attractions in the county.
“I believe the signs will play their part in linking our larger iconic visitor attractions with lesser-known sites, dispersing visitors and thus increasing the dwell time and spend in the area.”
She said the county needs “to work together and optimise our unique location next to the capital and also as an important component of Ireland’s Ancient East”.
Jenny De Saulles, Head of Ireland’s Ancient East with Fáilte Ireland, said: “We want to transform Ireland’s Ancient East from a transit zone to a touring zone by increasing visitor dwell time in the region,” she said.