Katja Spitz, Las Vegas’s new International Markets Manager, has made her first trip to Ireland to get to know the trade.

Working with  Tryphavana Cross, the Convention and Visitors Bureau’s face here in Ireland, Ms Spitz said she’s looking forward to being a regular visit to these shores and working with the trade.

Multilingual Katja, who’s originally from Sweden, and whose mother is French, will also be responsible for the markets in Britain, the Benelux countries, Scandinavia and France.

But Katja – who has taken over from Kelly Sawyer in the Irish market – revealed that she’s no stranger to the CVB and to Vegas itself, working in a number of high-end hotels: “I have been with the company for almost eight years, previously I worked at the Hard Rock, The Palms and the Ritz-Carlton.”

And she’ll be a familiar face in the future, saying: “I will be over quite often – I’ll be back at the end of the June for the big mission here, and the sales mission will bring over our Las Vegas-based partners to meet with the trade. I’ll probably be over a couple of times a year too.”

For a first-timer to Ireland, she’s learning quickly that Las Vegas is big draw for the Irish: “My taxi driver yesterday told me all about it,” said Katja. Ireland is the ninth biggest global market to the city, but Tryphavana Cross believes that the Irish numbers – which can be hidden due to Irish people travelling on US passports, and  through non-Irish airports – are in fact even higher.

Katja Spitz said that Vegas itself is constantly changing – and a new focus is now on the sports market, catering to fans of the major US associations.. “We’ve really evolved over the past few years – gaming is not the primary focus for anyone coming to Vegas any more,” she said. “Now our big focus is on being the entertainment capital of the world with all the big shows, the dining of course, and now we’re focusing on the sports aspect. 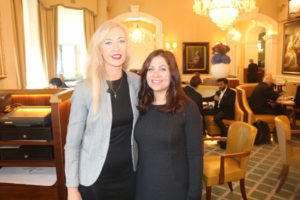 “We have our NHL (ice hockey) team – the Las Vegas Knights – who were very successful last year and took second place in the Stanley Cup, which was a real Cinderella stuff for us.

“Hockey in the desert! Everyone laughed and we said ‘ha ha’,” she said of the successful campaign in the sport’s premier trophy campaign.

The city also boasts a women’s NBA (basketball) team – the Aces – who play at Mandalay Bay hotel, with Katja adding: “We have a baseball team coming and the brand new ballpark has just opened in Summerlin. Then we have of course the Oakland Raiders (American football) who’ll be coming as the Las Vegas Raiders in 2021, we’re estimating now. We’re building a 65,000-seater stadium to hold their games.”