Trending
You are at:Home»Food and Beverage»‘Live rat coming out of a drain’ among reasons for FSAI closure orders 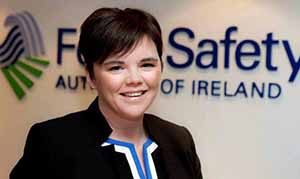 Pamela Byrne CEO of the Food Safety Authority of Ireland

Khyber Garden (restaurant),11 Market Street, Kells, Meath At this restaurant the inspector saw a live rat coming out of a drain when the tap was turned on: Rat droppings were evident in the boiler room off the kitchen and on the floor in the dry goods food storage area. A live rat was observed in the rear yard beside a defective open drain. The rat emanated from the drain when the tap at the kitchen sink was switched on. The FSAI said the risks observed by its inspector pose a grave and immediate danger to public health.

Echemas Trading Store (retailer), 11 Upper Gerald Griffin Street, Limerick Rodents were also a problem here, on foot of a complaint received by the FSAI an inspection was carried out where inspectors found evidence of droppings. During the course of this visit inspecting Environmental Health Officers found evidence (droppings) of rodents indicating recent rodent activity. The report also notes the premises in its “current state is not pest proof”.

Oldcourt East Bakery, 1 Main Street, Castlelyons, Cork The report here found filthy areas with an “accumulation of dirt and old food debris evident in many areas.  The level of insects was also of concern here: There were numerous flies, crawling insects and cobwebs observed on surfaces and equipment throughout the main bakery and in associated areas. Four flies were observed in a mixture of dough.

Bengal Indian Foodstall, Trading at Semple Stadium, Thurles, Tipperary, Here hygiene and a lack of access to fresh water were highlighted as concerns:. There was no water available at (the) wash hand basin for washing hands. Numerous dirty pots and plastic containers were stacked on the floor inside the food stall. Inspectoris also noted additional dirty pots were stored on the ground to the rear of the food stall, and dirty chopping boards were in use.

Kings (takeaway), Unit 8, Bayside Shopping Centre, Bayside, Sutton, Dublin 13 At Kings takeaway while the inspector was present no handwashing was observed. Food was found to have been left unrefrigerated and safety procedures were not adhered to. The FSAI also reports staff have not been given adequate training on standard food safety practices.

Super Ketones (retailer), 76 Prospect Hill, Galway Inspectors noted raw meat carcasses were hanging in the cold room, while there was a wash hand basin present in the area it was not plumbed into a hot and cold water supply, which increases the likelihood of cross-contamination. There was also no evidence the owner had undergone any food safety training.

Mint Leaf (restaurant), 157 Drumcondra Road Lower, Drumcondra, Dublin 9 Inspectors here also noted a lack of a wash hand basin and said the facility itself was inappropriate for preparation of raw meat. The current use of this shed for food preparation may lead to the unhygienic storage, handling and processing of foods and therefore posing an unacceptable risk to public health.

Baby Pure Water Limited (packaged water), Ardbraccan, Navan, Meath. Inspectors criticised Baby Pure Water Limited for placing bottled water on the market without evidence of complying with regulations. The FSAI said the “significant non compliance of food safety legislation and will or is likely to pose an unacceptable health risk to consumers of the water”.

Chief Executive of the FSAI Pamela Byrne said:  It is very concerning to see that the reasons for closure orders this month were mainly due to filthy conditions and unhygienic practices. Closure orders are only issued when “a serious risk to consumer health has been identified or where there are a number of ongoing serious breaches of food legislation”.

More details of the closure orders and dates they were enforced are available here.