Trending
You are at:Home»Ireland inbound»Lonely Planet declares Dublin the seventh-best city in the world to visit in 2022

Tourism Minister Catherine Martin and Tourism Ireland welcome the latest Lonely Planet accolade and set out to maximise the recognition around the world, writes Shauna McCrudden 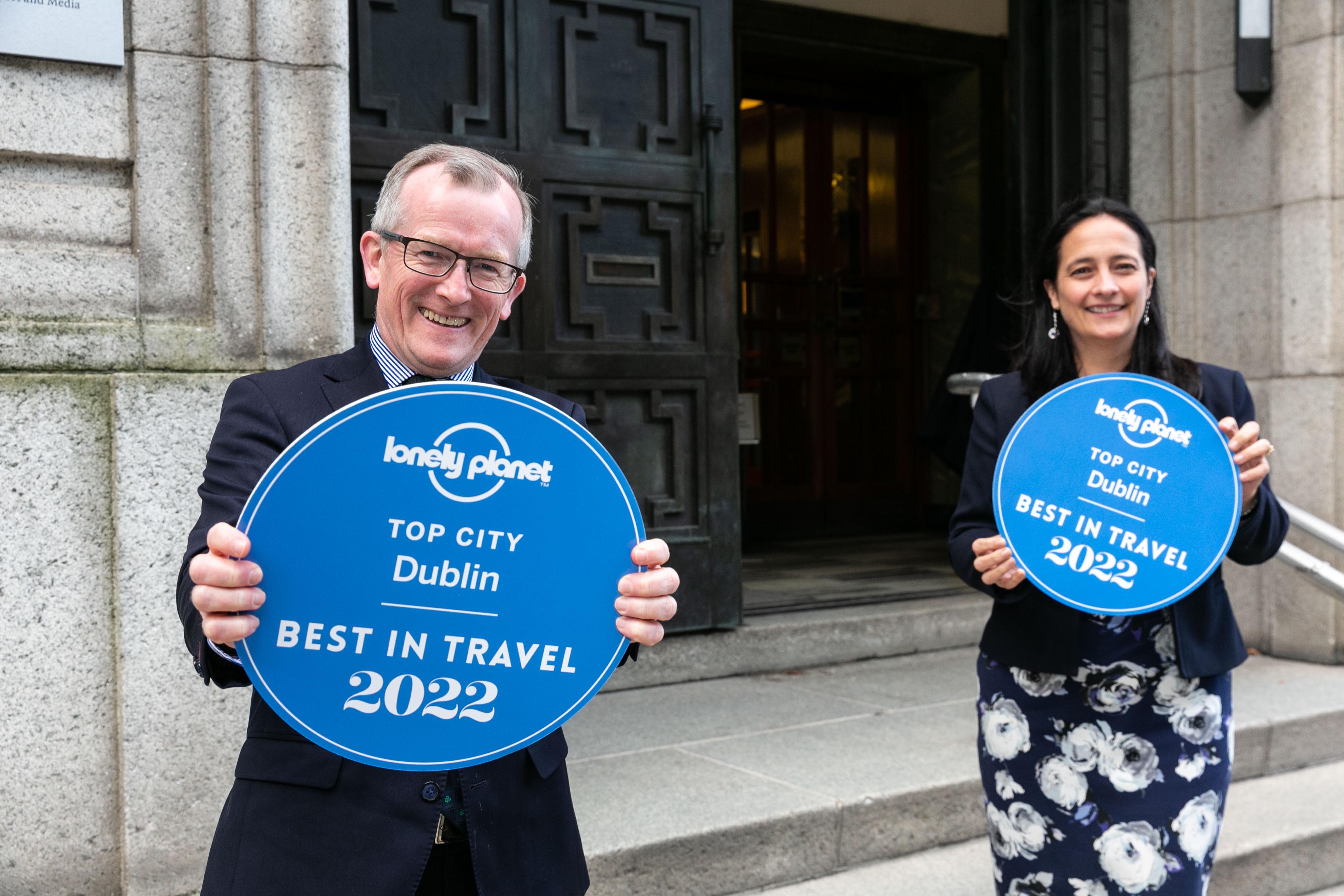 Niall Gibbons, CEO of Tourism Ireland; and Catherine Martin TD, Minister for Tourism, Culture, Arts, Gaeltacht, Sport and Media, at the announcement that Dublin has been named the seventh-best city in the world to visit in 2022 by Lonely Planet. Pic – Shane O’Neill / Coalesce

Dublin has been named the seventh-best city in the world to visit in 2022 by Lonely Planet! The leading travel media company unveiled the accolade today, Thursday, 28th October, in the prestigious Lonely Planet’s Best in Travel 2022 – its collection of the world’s hottest trends, destinations, and experiences for the coming year.

With 2022 marking 100 years since the publication of James Joyce’s Ulysses, Lonely Planet’s Best in Travel 2022 will encourage visitors to follow in the footsteps of Leopold Bloom, with a stroll around the city to see its architectural and cultural delights.

Minister for Tourism, Culture, Arts, Gaeltacht, Sport and Media, Catherine Martin TD, said, “I would like to congratulate the beautiful city of Dublin on being recognised as one of the best cities to visit in Lonely Planet’s Best in Travel 2022. This is a wonderful accolade for the city and very well deserved.

“It has been such a difficult period for our tourism industry and this is a timely reminder that Ireland and, in particular, Dublin remains a world-class holiday destination. I would like to encourage all domestic and international tourists alike to visit Dublin and mark the centenary of the wonderful book ‘Ulysses’ from one of our many literary icons, James Joyce, and follow in the footsteps of the uniquely Irish Leopold Bloom.”

Dublin city is described in Lonely Planet’s Best in Travel 2022 as “one of Europe’s most down-to-earth and friendly cities”. It mentions Dublin’s “Georgian squares, traditional pubs and warm people” and it goes on to say that “modern Dublin still has all the appeal of the city in Joyce’s day plus a host of compelling contemporary reasons to visit now”.

Welcoming the news, Niall Gibbons, Chief Executive of Tourism Ireland, said, “The inclusion of Dublin as the Number Seven City in the world in Lonely Planet’s Best in Travel 2022 is wonderful news and will surely help to inspire travellers everywhere to put Dublin and Ireland on their holiday wish-list for next year.

“As we restart tourism from overseas, it is another well-deserved accolade which will help position us well for 2022 and create ‘stand-out’ against competitor destinations. I would like to thank Lonely Planet for the wonderful support they have shown the island of Ireland over the years.”

Tourism Ireland is taking every opportunity to maximise this accolade for Dublin and Ireland, over the coming weeks and months. Activity to spread the good news will include:

Tourism Ireland has also recently launched its new ‘Green Button’ global campaign, to re-start tourism and encourage as many overseas visitors as possible to book Ireland for their next short break or holiday. Tourism Ireland will leverage the Lonely Plant accolade to complement that message and encourage people around the world to ‘press the Green Button and discover Dublin’.