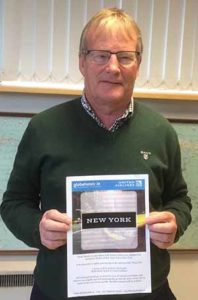 Martin Dempsey of Dempsey Travel, Trim was the September Winner of the Globe Hotels / United Airlines Fam Trip to New York on March 7y for 3three nights staying in the Riu Plaza Hotel.

There will be seven more winners picked over the coming months. two in October, one in November and December and two2 in January.

Agents who make a booking with Globe Hotels to any destination are automatically entered in  the monthly draw. October winners will be announced early in November.