Trending
You are at:Home»Travel Trade News»Mary McKenna 'over the moon' to be shortlisted for entrepreneur of year award

Mary McKenna of Tour America says she is delighted to have been chosen as one of the 24 Irish finalists in the prestigious EY Entrepreneur of the Year award.

Mary was named in the ‘International category’ along with heavy-hitters from the pharmaceutical, technology, telecom, financial services and industrial sectors.

The category winners and an overall 2018 EY Entrepreneur of the Year award winner will be announced in Dublin at a televised ceremony this autumn. Judges will be looking for innovation, value creation, strategic direction, financial performance, national and global impact and the entrepreneurs’ contribution to society and industry. 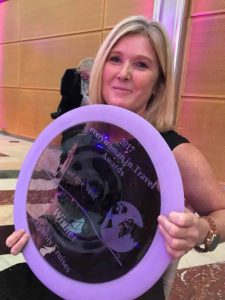 Mary McKenna winner of the Inaugural 2017 Everywoman in Travel Awards at East Wintergarden in London, November 16 2017

Ciaran Mulligan and Rowan Devereux were finalists in the Irish awards back in 2011 with Blue Insurance.
Mary, who was recently elected to the Dublin Chamber, and has won the Deloitte Best Managed prize for nine years in a row and the Inaugural 2017 Everywoman in Travel Awards in London last year, told Travel Extra: “I am over the moon – absolutely chuffed. It’s a massive honour for the company.
“If you win the overall one [in Ireland]you go to Monaco to represent Ireland among the world… I think I’m the first travel agent to be awarded this,” said Mary, adding that it’s good for the travel industry to be recognised by the wider business community and take its place among industries such as banking, technology and financial services.
See also  Ireland’s biggest Russian tour operator cancels entire programme
The following two tabs change content below.