Trending
You are at:Home»Travelextras»Mexico told to learn from Ireland as it embraces the non-American tourism market

Trump-era Mexico is looking to attract more tourists from Ireland, Europe and Asia as it diversifies away from the core North American markets in these uncertain political times.

And the country’s 31 states showcased themselves to the world’s media and buyers at the latest annual Tianguis Touristico (its equivalent of America’s IPW) in the resort town of Acapulco. Mexico Tourism also showcased its new-look website and cross-platform website, www.visitmexico.com, revealing a nation that’s more continent than country, with 68 native language groups. 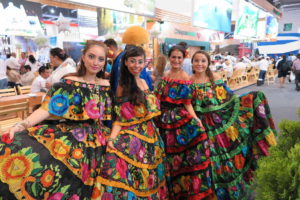 But the country could learn from the successes of Tourism Ireland’s Wild Atlantic Way and Ancient East campaigns, Skift brand manager Greg Oates told Lourdes Berho, CEO of Mexico Tourism, in front of an international audience of journalists. While raving about visit mexico.com, he added: “I love the new-look Mexico platform… but who is going to come to it if you don’t have stories?”

If you want stories, look to the Irish, he advised, and gave the packed audience a showcase of imagery from Kerry to Kilkenny. Watch his speech on Ireland here. Oates said Skift now has the “largest B2B audience run travel” and will be launching a luxury travel micro-site next month. He said that while Mexico isn’t in danger of overtourism any time yet, he pointed to the difficulties faced by cities such as Venice and said it “could easily stop that by getting ride of 3,000-berth boats”.

Those hiccups aside, Tianguis Touristico went like clockwork, with lavish displays (connect to the Facebook album here) here that would put its larger IPW neighbour to shame. Dinosaurs, ethnic dancers, Mezcal tastings, cowboys, bandits – the 7,000-plus audience of trade and media was treated to a riot of colour. The opening night party, held in Acapulco, featured a live performance by Los 5, Mexico’s answer to Westlife, fireworks displays and  some serious party dresses.

The country’s now the ninth most-visited in the world, with upcoming figures tipped to show that ranking rise, despite the ructions north of the border