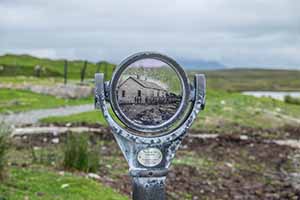 Minister of State for Tourism Patrick O’Donovan has opened the Discovery Point at Derrigimlagh, one of the Wild Atlantic Way’s Signature Discovery Points. The site has been significantly developed to feature an interactive interpretative looped walk on the history of the area. The discovery point, just south of Clifden, Co Galway, marks the site of two major transatlantic technological achievements – the world’s first commercial transatlantic wireless station and the landing site of the first non-stop transatlantic flight.

With funding of €1.2m provided by Fáilte Ireland and project managed by Galway County Council in association with Connemara Chamber of Commerce, the new development provides visitors with a looped walk of five kilometres through a bog landscape where they can discover the stories of this famous site. The features of this walk include:

The stories of the location are told across a number of stop points or interpretative ‘hides’ along the looped walk from the entry point to the location of former Marconi Company landmarks such as the Condenser House, the Power Station and the Social Club. The landing site of Alcock and Brown provides a special highlight on the interpretative walk.

Derrygimlagh is one of 15 signature discovery points along the Wild Atlantic Way that Fáilte Ireland is updating through interpretation and improved visitor management. Further initiatives are currently underway at other signature discovery points along the route: at Malin Head, Co. Donegal; Keem Bay, Co. Mayo; Bray Head, Co. Kerry; and the Old Head of Kinsale, Co. Cork. All of these are due for completion at various stages over the next two years.

Minister Patrick O’Donovan said “the story of Derrigimlagh is a compelling story of 20th century technological achievement. It is an example of how Ireland is at the frontier of scientific progress, while at the same time providing wonderful holiday locations on the edge of Europe. The challenge for us was how to bring this story alive in a compelling and innovative fashion. I think that all involved have successfully risen to that challenge and we now have a Discovery Point which not only tells a story but actually immerses the visitor – and all set against the background of the beautiful and remote landscape of Connemara.”

Fiona Monaghan Fáilte Ireland’s Head of the Wild Atlantic Way said “visitors to Derrigimlagh will now be taken on a journey of discovery back to the early 1900s where they can, literally in some cases, look back to the time of Marconi and Alcock and Brown. The interactive features of the site – playing on sounds, sights and landscape – are designed to draw in the tourist and encourage them to interact with the history of the place. This development is a great example of what we have planned for the Wild Atlantic Way. While many consider the brand a success, we in Fáilte Ireland are only just starting and the Wild Atlantic Way has much more to reveal over the coming years. Part of this will involve the provision of innovative and well-managed experiences which offer distinctive and original appeal to overseas visitors. While rooted in a great historic story, this development at Derrigimlagh also shows the future potential for the Wild Atlantic Way.”

Nessa Joyce, President Connemara Chamber of Commerce said:“Connemara Chamber of Commerce is delighted to have been involved in the provision of the new visitor experience at Derrigimlagh that properly recognises the World Class achievement that took place there at the turn of the 20th Century. The chamber is proud of our members who contributed so much to the co-operative process working with our partners Fáilte Ireland and Galway County Council. In particular we want to thank Shane Joyce for his encyclopaedic knowledge on Marconi along with Alcock and Brown and Chris Shannon for his representation of the chamber throughout the design and build process.  The chamber acknowledge with thanks the many members of the chamber who funded the initial land bank purchase and Fáilte Ireland who have invested so much in making this long awaited investment possible.”