Trending
You are at:Home»Afloat»MSC reveals Grandiosa as name of first Meraviglia-Plus ship at ceremony in France

MSC Cruises is to name the first of Meraviglia-Plus ships MSC Grandiosa, Executive Chairman Pierfrancesco Vaga revealed at a ceremony in France as part of the company’s €9bn fleet-building plan.

Under the €9bn plan, six of 11 new ships will have come into service between June 2017 and November 2020, resulting in a doubling of fleet capacity in just three and a half years. 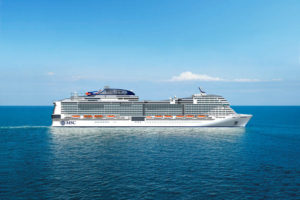 An artist’s impression of MSC Bellissima

The company held an event at the STX France shipyward in St-Nazaire featuring the ceremonies of the coin for MSC Bellissima as well as the cutting of the first steel for MSC Grandiosa.

Two other ships, MSC Seaside and MSC Seaview, are currently being built at the Financantieri yard in Italy. “We are celebrating a truly unique moment, as it is the first time that key shipbuilding milestones for two different ships are celebrated on the same day,” Mr Vaga said in France.

Both MSC Bellissima and MSC Grandiosa will feature Cirque du Soleil at Sea, in an exclusive partnership between MSC Cruises and Cirque du Soleil to create a total of eight original shows exclusively available at sea.

Mr Vaga added: “The Meraviglia generation of ships is already setting a new standard for the cruise industry and is just one of the three brand new prototypes that we have designed to bring the cruise guest experience to the next level. MSC Grandiosa is named to signify magnificence and grandeur, a fitting name for this even richer, ultra-modern mega-ship.

“Additionally, with MSC Grandiosa we also continue to innovate in product. Just as MSC Cruises ‘democratised’ the luxury cruise experience when we were the first cruise brand to introduce a ship-in-ship luxury concept – the MSC Yacht Club, we are now doing the same for art and culture with the very first fine art museum at sea. MSC Grandiosa will be the third of only four MSC Cruises ships to exclusively feature Cirque du Soleil at Sea, hosted in the uniquely complex, custom-built Carousel Lounge.”

The traditional coin ceremony for MSC Bellissima involved two commemorative coins being placed into one of the ship’s blocks as a sign of blessing and good fortune for the ship and her crew.