Trending
You are at:Home»Afloat»NCL simplifies the booze cruise concept as it unveils premium all inclusive for Irish market

Norwegian Cruise Line brought its corporate heavy-hitters to Dublin as it unveiled ‘Premium All Inclusive’ – and the end of tipping awkwardness – to the Irish market. NCL will launch the product here from tomorrow, with the added incentive of up to €200 per room off early bookings.

And it’s aimed squarely at the harder-drinking European market with Francis Riley, Senior Vice President, Sales & Operations at its Miami HQ, saying: “We won’t be doing it in North America – they’ve no problem with tipping and they don’t drink the same amount.”

Christian Böll, NCL’s Managing Director Europe, Middle East and Africa, said at the event in Taste at Rustic in Dublin: “We believe there is a lot of growth potential in the Irish market, and we believe in quality for money and entertainment.” Premium All Inclusive has already been introduced in other European markets, and Francis Riley added: “It drove higher-value bookings overall and travel agent commissions went up. Since 2010 we’ve really upped our game.” 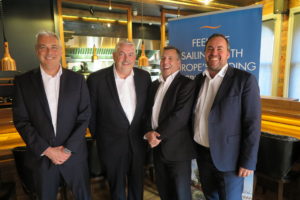 Christian Boll said “I’m confident that our Irish guests are going to love Premium All Inclusive too”, with the package including:

Cruise lines are as much in competition with land-based all-inclusive resorts as their ocean competitors, and Nick Wilkinson, Senior Director and General Manager Northern Europe & MEA, Norwegian Cruise Line, said: “The launch of our product as Premium All Inclusive is a game-changer for the large ship ocean cruise market and it offers a wealth of opportunity for our valued travel partners. We have armed them with a powerful sales tool, helping to convert customers who may not yet have considered cruise as a holiday option, whilst also introducing new-to-brand cruisers to the Norwegian product.”

The cruise line, with revenues of around $5bn a year, is adding a number of new ships to its 14-strong fleet, with Francis Riley telling the audience: “We have nine new ships – where do we put them?” With the move to all inclusive, the company is expecting to solve that problem by growing what remains a largely untapped market compared to the United States.