Trending
You are at:Home»Travelextras»New for 2019: Ballyfin joins list of hotels in Ireland’s Blue Book

Ireland’s Blue Book, a collection of country house hotels, manor houses, castles and restaurants located throughout the island of Ireland, has added six properties at the launch of its 45th Anniversary Edition. 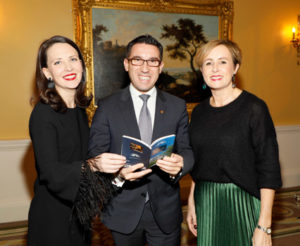 Ireland’s Blue Book Chairperson, Simon O’Hara said of the newcomers: “Not only do they provide wonderful locally sourced food and luxurious accommodation, but their charm, history and individuality make them a highlight of any Irish journey or occasion.”

The announcement of the new additions was made at reception in The Merrion Hotel in Dublin to celebrate 45 years since the collection was founded in 1974.