With close to 1.8m Irish holidaymakers choosing to visit Spain in 2016 alone, demand is already high for next year’s summer season as families aim to secure the most popular dates, destinations and hotels.

Falcon and Thomson launched next year’s brochure – which will be the last before the rebrand to the flag of parent group TUI – at a lunch hosted by Marketing Manager Charlotte Brenner which also marked Belinda Vazquez’s debut in her new role as Head of Ireland for TUI.

Mum-of-two Vazquez, who has had a varied career at the travel giant at higher management level, including aviation management, described her new position heading up Ireland “as a dream role”. Watch her here at the brochure launch. 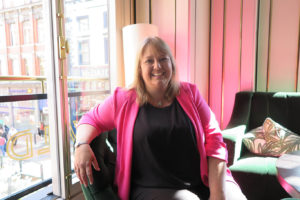 Seven new exclusive Falcon and Thomson are available, including: new SuneoClub in Bulgaria; Family Life in Ibiza; A La Carte in Majorca, Sensatori in Rhodes; Sensimar in Zakhyntos; and two new Platinum additions in Majorca.  Thomson Cruise’s largest ship, TUI Explorer, makes its debut too, with destinations around Spain, Portugal, Italy and France out of Palma.

Charlotte Brenner told Travel Extra that customers are getting choosier about hotel choices, booking ahead to secure seaview or other preferences, and with deposits from €75 to guarantee selections.

Also new next year is an extra rotation to Mexico on the Thomson Airways 787 Dreamliner.

See also  All aboard! ITAA hold board meeting on cruise ship
The following two tabs change content below.