Shannon Airport has opened a new restaurant in the final phase of a €2.1m investment in food and beverage facilities. JJ Ruddle’s Bar & Restaurant is the final part of a two-year investment programme by Zest, a subsidiary of Irish inflight catering company EFG Inflight. 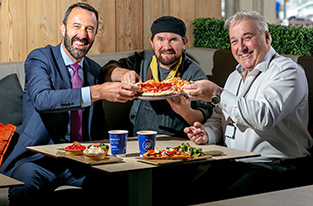 Over the two-year period of the investment programme, employment at the company’s operations in Shannon rose from 140 to 310. The new arrivals area restaurant is named after Shannon’s architect from 1963 to 1984, JJ Ruddle, who also designed Lahinch Golf Course clubhouse, which will host next year’s Irish Open. The late Mr Ruddle’s daughter Fiona and Ean Malone are co-owners of Zest.

The wider airport investment saw the introduction of The Food Market in the transit lounge and a complete redesign of the Sheridan Bar in the Departures Lounge in May.  The company has also introduced a new Food and Beverage offering at the departures gates, ‘Harry’s at 8’, named after Ean’s father, Harry Malone.

JJ Ruddles, which features an outdoor area, seats 80 and runs from breakfast at 5am to late night dinner service.

“Shannon has such an incredible history and one of the things that younger generations wouldn’t know about was that it had one of the finest restaurants in the entire region. We want to recapture that sense of quality and put the love back into food,” said Fiona Barry.

“We want this to be a destination restaurant also and the standards are there to match. The flip side of that is Shannon gets a restaurant with a standard that no other airport in Ireland and many outside it has.”

Shannon Airport Managing Director Andrew Murphy said: “We have a very proud history in so many areas of the business, including our food offering. When we gained independence, one of our primary goals was to restore that standard…  It’s not your average airport food offering but Shannon has never been interested in average.”