Trending
You are at:Home»Aviation»Off to Newark on EI-FNG & other news from the world of aviation

Aer Lingus received delivery of their latest Airbus A330-302 EI-FNG c/n 1742 on Wednesday, just in time for it to take off on the carrier’s inaugural flight to Newark. The inaugural flight EI101 to Newark, New Jersey, an Airbus A330-202, named St Caoimhe, took off from Dublin airport at 12.55pm with 50pc of passengers having started their journey outside of Dublin in destinations such as Paris, Brussels, Hamburg, Manchester, London and Edinburgh.

Turkish are to reduce Dublin flights to Istanbul Ataturk from 14 to 10 weekly from October 30 to March 15.

Two more pilots were stopped for exceeding the alcohol limit of 0.02 at Glasgow. United Airlines flight was delayed by ten hours. So why Glasgow? One forum poster claimed the bar staff in the Holiday Inn have a reputation for shopping pilots, usually getting it wrong. Must be true then.

Swiss International Airlines has presented its latest passenger airline, the 125-seat Bombardier C Series 100, to the international press, in Budapest. 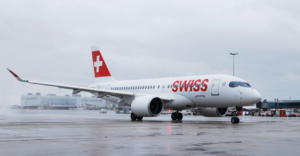 Starbucks is set to open a new café in the departures lounge of George Best Belfast City Airport, creating 25 jobs in the process.The new café will be the 19th Starbucks in the north.

The ECC reported that four out of ten complaints relate to aviation.