Trending
You are at:Home»Aviation»O’Leary aims to link up with legacy carriers and talks up Trump

Ryanair CEO Michael O’Leary expects the airline to have its first interlining agreement with long-haul carriers up and running by this summer, the Airlines for Europe (A4E) conference in Brussels was told.

“I think that legacy carriers such as Air France-KLM and Lufthansa will work within five years with Ryanair and EasyJet. We’ll feed them their long haul because we can do it much cheaper,” he was reported as saying. 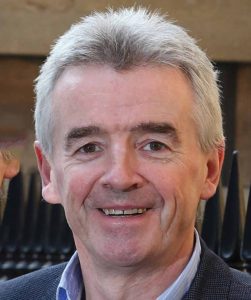 Ryanair is working to conclude such an agreement with Norwegian, which will launch additional transatlantic services this year. In the short term O’Leary wants to enter into co-operation with Alitalia.

But a Dutch website reported that O’Leary was critical of low-cost operator Transavia, saying: “Only in France [headquarters of Air France/KLM]they still think that Transavia is a low-cost airline. Their prices are five times higher than ours.”

The website said he believed that Transavia is not competitive enough to survive: “In three to four years Transavia no longer exists. It will be then transformed into Air France Regional or something.”

More controversially, O’Leary said the airline industry must play a wait-and-see game with the new US President, Donald Trump.

“If he implements some of his stated policies – reducing taxes, promoting fracking, lowering the price of oil – it would be very good not just for the US economy but for the world economy generally.”

He added: “The media don’t like him but then they didn’t like (president) Ronald Reagan either. They all thought he was some mad cowboy when he got elected.

“We should wait to see what Trump does over the next two years and if it’s successful, great.”