Trending
You are at:Home»Afloat»Peek inside MSC game-changer Seaside, and see the float-out of sister ship Seaview

Summer 2018 is already hotting up in the cruise market, with MSC giving trade and media a sneak peek at not one but two of its latest generation ships.

The world’s largest privately-owned cruise line brought trade partners onboard to see the ongoing work to get MSC Seaside shipshape in time for service this winter.

And hundreds of international visitors also got to see MSC Seaview, in a float-out ceremony. Both ships are truly enormous – with the exta deck width designed to keep passengers in touch with the sea and surroundings.

Seaside will sail in December from Trieste in Italy across to Miami and ply her trade in the Caribbean.

And sister ship Seaview touched water for the first time at the gigantic Fincantieri company’s shipyard outside Trieste, and she will operate initially in the Western Med from summer 2018.

Antonio Paradiso, Managing Director for Britain and Ireland, told Travel Extra that the two ships are “game-changers for the cruise industry”. He said that while many new ships focus on interior activities, these new ships will be “following the sun” and the emphasis is on the outdoors experience in sunny climes. 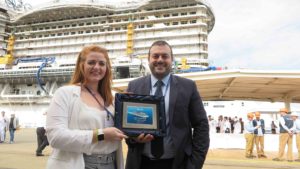 They will feature buffet restaurants with al fresco dining in the sun, 360-degree promenade area, and outdoor panoramic elevators plus a pool area with sunbeds at the aft of the ship. And warm nights in the Caribbean or Med will be enjoyed on deck – with another first at sea as the forward pool will be covered over in the evenings and the area will be transformed into an outdoor nightclub venue.

“They will have the highest ratio of outdoor space of any cruise ship,” Mr Paradiso added. The 154,000- ton Seaview will be almost identical to Seaside “more twin than sister”, Mr Paradiso told Travel Extra large. Both will feature aft balcony suites with outdoor tubs, an expanded Yacht Club, nine restaurants, a seafood restaurant with a chef’s table, a restaurant exclusively for families and a steakhouse, plus 20 bars.

The two ships – each with a maximum capacity of around 5,200 passengers – are the biggest ever built in Italy, with up to five to six thousand shipyard workers involved in constructing them on any given day at the docks in Monfalcone

At a ceremony to ‘float out’ Seaview, at which seawater was pumped into the dry dock, MSC Cruises CEO Gianni Onarato said of Seaview: “Our vision has been inspired by our passion for the sea and we are appealing to guests who are seeking the classic elements of a holiday – sun and sea – taken to the next level with a one-of-a-kind fully immersive and interactive seaside experience even whilst cruising.”

Check out the full album from the event here.