Aer Lingus is to fly four times per week from Dublin to Philadelphia from March 25, 2018. It said the decision was on the back of parent company IAG’s investment in new jets, with Aer Lingus taking delivery of four new long haul aircraft in the last 24 months, enabling it to launch routes to LA, Newark, Hartford, Miami and now Philadelphia.

On the decision to fly to the Pennsylvania city, which currently has daily non-stop flights with American Airlines, Aer Lingus Chief Operating Officer Mike Rutter said: “We believe it’s deeply under-served. It’s the ninth most visited city in America, it has a high number of cultural links with Ireland, it’s the most densely populated of the diaspora family from a city perspective and it provides us with an opportunity to start building relationships with American airlines on top of the strong relationship with JetBlue.”

He told Travel Extra that choosing a city is a bit like a cab stand – and “Philadelphia was the most attractive” choice. He said the airline will announce another transatlantic route in due course, and while a seasonal route to Las Vegas made less economic sense, it is still a contender. For video of the full announcement, watch here.

The airlines is adding eight long range Airbus A321 aircraft to its fleet in 2019 and 2020, and this will open up other opportunities, he added. The more economical aircraft, which can have passenger loads of circa 200, can service North America as far as Calgary and the Rocky Mountains, southwards to the middle of Africa, and eastwards to Russia and the Middle East. 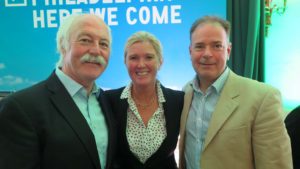 Summer 2018 will mark the airline’s largest ever long haul programme with 177,000 additional seats across the Atlantic over the summer season. Total capacity to and from North America for 2018 will reach 2.75m seats. Additional transatlantic expansion includes a daily service to both San Francisco and Los Angeles on the US West Coast as well as twice daily flights to Chicago.

Miami, which was launched as a new route in late summer 2017 and subsequently as a new winter route, will continue into next summer operating 3w. Miami combined and Orlando, operating 4w, will offer a direct connection from Ireland to Florida every day for summer 2018. Washington will continue to operate daily for summer but on a larger Airbus A330-300 series aircraft, for four out of seven days, providing 31pc additional seats on the route.

Mr Rutter said the airlies is continuing to drive its strategy to make Dublin a “major, major” North American gateway. Aer Lingus said it will offer seamless connections from Philadelphia to 21 key European destinations via Dublin.

Fares to Philadelphia start from €199 each-way including taxes and charges, when booked as a return trip.