Trending
You are at:Home»Aviation»Philadelphia here we land: Traditional water-cannon salute for Aer Lingus flight EI115 in the US

Aer Lingus’ inaugural service direct to Philadelphia received the traditional water-cannon salute as Flight EI115 touched down in the Pennsylvania city’s airport.
The 757,carrying the registration EI-LBS and named Saint Columbanus, left Dublin at 1.40pm on Sunday for the first of two new transatlantic routes this summer. Operating in its initial phase four times weekly, the Dublin Philadelphia service will increase to daily from May 18.
Philadelphia International Airport CEO Chellie Cameron said: “We are happy to welcome Aer Lingus as our newest foreign flag carrier. Our goal is to provide passengers with flight options and we’re proud that our new airline, Aer Lingus, provides people with a competitive flight to Dublin. We are excited to welcome both leisure and business travellers to our city that is home to some of the nation’s top universities, businesses and tourism sites.”
As reported by Travel Extra, Aer Lingus is to make an announcement in May on its 2019 north American destinations. The airline launched a Request for Information for Commercial Support for Transatlantic Network Development offering what it called a unique opportunity for North American airports and their local communities to invest alongside Aer Lingus in the introduction or expansion of Aer Lingus service. 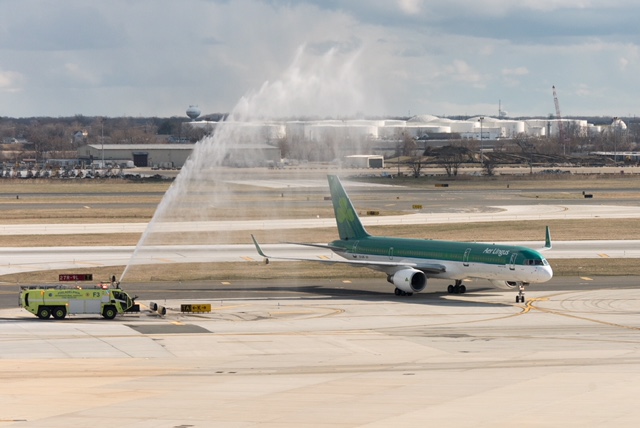 The latest route expansion comes on the back of IAG investment in new aircraft, with Aer Lingus launching five new direct services the last 24 months – Los Angeles, Newark, Hartford, Miami and now Philadelphia.  In May Aer Lingus will begin Ireland’s first direct service to Seattle which will be airline’s 15th direct route out of Ireland to North America.
Summer 2018 will mark Aer Lingus’ largest ever long haul programme with 2.75m seats across the Atlantic, featuring a daily service to both San Francisco and Los Angeles as well as twice daily flights to Chicago.
Miami, which launched in late summer 2017 and subsequently as a new winter route, will continue into next summer operating three times per week. Miami combined and Orlando, operating four times weekly, will offer a direct connection from Ireland to Florida every day for summer 2018. Washington will continue to operate daily for summer but on a larger Airbus A330-300 series aircraft, for four out of seven days, providing 31pc additional seats on the route.
Mike Rutter, Chief Operating Officer, said: “We remain focused on growing our transatlantic network and further strengthening our Dublin base as a leading gateway to North America. Aer Lingus’ transatlantic offering not only leads the way in our home market but our connecting options via Dublin also continue to gain pace.”