Trending
You are at:Home»Travel Trade News»Plucked to safety: US Embassy pardons Dustin the Turkey for Thanksgiving

The Chargé d’Affaires of the United States Embassy, Reece Smyth, has pardoned Dustin the Turkey at a Thanksgiving Reception at the US Ambassador’s Residence in Dublin.

Each year in modern times the US President “pardons” a hand-selected turkey, sparing the bird from someone’s dinner table and ensuring the rest of its days are spent roaming on a farm.

Reece Smyth, as Acting Ambassador here, received a request from Dustin the Turkey to be pardoned. While it’s unusual for ambassadors to give pardons, an exception was made. 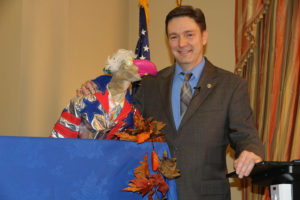 Chargé d’Affaires Reece Smyth said: “I had to think long and hard and I consulted with many members of the Irish public on what was the best course of action. While opinion was divided on whether it was time to finally roast this turkey, ultimately I decided to give him the benefit of the doubt and spare him. I just hope he appreciates this second chance and doesn’t let me down in the future.”

After the event, Dustin the Turkey said, “I simply hope that my own great leader President Michael D Higgins will take the nod from the Americans and pardon me this Christmas. Go on ye good thing.”

The Embassy said that Americans have been sending the US President turkeys for the holidays since at least the 19th century. Beginning in 1873 during Ulysses S Grant’s presidency, Rhode Island man Horace Vose was responsible for “selecting with the utmost care” the “noblest gobbler in all that little state” for the President’s Thanksgiving dinner, a tradition he carried out for more than 25 years, according to The New York Times. In 1947, the National Turkey Federation took on the role of official turkey supplier to the President, delivering a 47-pound bird in time for the Christmas holiday.

That year, the White House also began holding a turkey receiving ceremony, usually in the Rose Garden, providing a photo op that many confuse with the beginning of the pardoning tradition. Back then, however, birds were more likely to be destined for the White House dining table than the easy life on a farm. In 1948, President Truman said he would take the gifted turkey home to Independence, Missouri, where his 25 relatives “require a lot”.

Tales of spared turkeys date back to days of Abraham Lincoln. According to one story, Lincoln’s son Tad begged him to write out a pardon for the bird meant for the family’s Christmas table, arguing it had as much a right to live as anyone. Lincoln gave in and the turkey lived.

In 1963, President Kennedy decided to send that year’s gift from the National Turkey Federation back to the farm where it came from. “We’ll just let this one grow,” he said. Sometime around the Nixon administration, the President began sending the turkey to a petting farm near Washington after holding the receiving ceremony and photo op, although no formal pardon was given.

President George HW Bush was the first to actually offer a turkey pardon. On November 14, 1989, he announced that year’s bird had “been granted a presidential pardon as of right now”. He sent the turkey on his way to the unfortunately named Frying Pan Park in Herndon, Virginia, and a tradition was born.