Trending
You are at:Home»Afloat»Ponant steps up activity in Ireland with facebook group 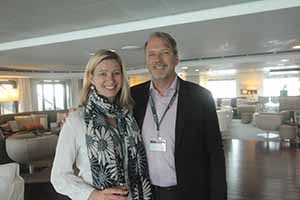 Ponant has introduced a dedicated Facebook group for agents in Ireland and Britain.  To join the group is to give agents can give administrator their agency number. If they do not have an agency number, they can contact the administrator directly to ask to join the Facebook group. Ponant was created in 1988 by Jean Emmanuel Sauvée and a dozen officers of the French Merchant Navy to offer a new style of luxury with luxury hotel services, aboard luxurious smaller-scale ships. ponant.com

A written statement from the cruise operators saids that the Facebook group: Ponant Experts Britain & Ireland will be a vehicle for Ponant to communicate directly with agents, sharing news about products, incentives, ship visits and events, to listen to agents’ feedback and input and run monthly competitions.

Stephen Winter, International Sales Director for PONANT says: “This is the first time that PONANT has launched such an initiative on any of its markets. It shows our continued involvement and dedication to the UK and Irish markets, and our ambition to significantly grow our share of the market in Britain and Ireland.”