Trending
You are at:Home»Aviation»Qatar: Airline boss talks of fam trips and a focus on travel trade in Ireland

Qatar Airways will make a push to showcase its offering to the trade in Ireland, CEO Akbar Al Baker told Travel Extra. “We will do fam trips, we will introduce them to the product, because we are a new carrier here and a lot of people have not travelled with us. Once they start travelling with us then they will differentiate with our competition,” he said.

Despite moves in the aviation industry to push passengers to book directly with airlines, Mr Al Baker said it wasn’t the case with his airline, which began flying from Dublin to Doha in June. “We are an airline that works with the travel trade. We are not an airline that feels the sun is shining through our asshole. We are humble, we like to serve people … at the end of the day the travel trade are the people that bring us passengers. My management have very clear instructions from me that they have to work with the travel trade.”

But he cautioned that it wouldn’t be a free-spending effort to push the product, which faces tough competition to the Far East from Etihad Airways, Emirates, Turkish Airlines and Finnair: “We don’t have very deep pockets vis-à-vis the incentives,” he said. 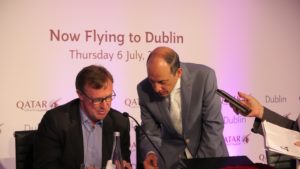 He said the recent airspace blockade by neighbouring countries – which is being appealed at the United Nations – isn’t affecting flight times from Ireland: “There is very insignificant impact for Europeans because the European flight time is increasing to a maximum of 15 minutes which I think is not very much. The only people impacted are to Africa and south America.”

The Dublin route, for now, is being served by Dreamliners, with 22 seats in business class and 232 in economy with what he said is “the most generous pitch of airline that operates here”.