Trending
You are at:Home»Aviation»Qatar to start Dublin-Doha next summer but the proposed route is ‘at the mercy of Airbus’ 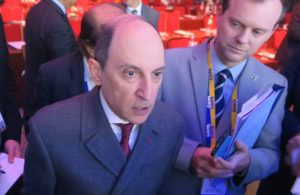 Qatar will operate Dublin-Doha direct daily from June 12 next year, according to CEO Akbar Al Baker, but he said that the airline is “at the mercy of Airbus.”

Speaking to Travel Extra on the margins of the CAPA ACTE Conference in Amsterdam, Akbar said Dublin-Doha would be operating by a Boeing 787 Dreamliner, but “to release that aircraft I need delivery of my A350s.”

Qatar has received just three of the 12 A350s it has on order from Airbus and recently moved orders to Boeing.

Baker said he needs to be convinced about the merits of the NEO, and may be cancelling his orders.