Trending
You are at:Home»Food and Beverage»Restaurateurs make last-ditch bid to save 9pc Vat, warning that rate rise would cost 12,000 jobs

The Restaurants Association of Ireland has made its latest plea to save the tourism sector’s 9pc Vat rate, amid reports that the special rate will go in the upcoming Budget. 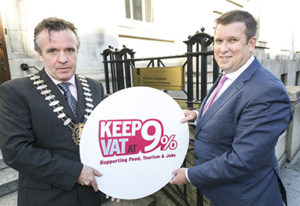 A report for the RAI, and carried out by economist Jim Power, showed that between spring 2011 and early 2018 the number of people working in the accommodation and food services sector rose by 54,400, taking total employment from 117,300 to 171,700 on a seasonally adjusted basis. It also found that the sector accounted for 7.7pc of total employment in the economy in the first quarter of 2018.

Mr Cummins said the association’s research also warned that rural restaurants,particularly  in the border counties, are vulnerable to sterling weakness even now, and this will remain a serious threat if a hard Brexit occurs.

Elsewhere, he said 82pc of restaurateurs who responded to a survey by BDO indicated that they were finding it difficult to attract and recruit staff to their business, with particular issues attracting chefs.

RAI Chief Executive Adrian Cummins said that the rumoured increase to a 11pc rate would “risk 12,000 jobs in the face of a potential hard Brexit. I am appealing to the Government to think twice before increasing the Vat rate… 9pc is what is appropriate for our industry, but it has proven itself as a success for Irish tourism. In the face of the high possibility of a hard Brexit, this increase will cause enormous damage to the economy of border counties and rural Ireland. An increase in Vat will only further add to these staffing issues as employers will find it difficult to hire additional staff during peak times, while offering competitive salaries to current staff members”.