Tourism Minister Shane Ross has insisted that despite concerns over queues at Dublin Airport, there’ll be no extra funding for the DAA.

Irish Travel Agents Association President Cormac Meehan was among those urging the Government to look at the issue.

“The ITAA has called for a meeting with the Department of Justice and Equality to get the issue of understaffing at Dublin Airport and other regional and national airports on to the national agenda, given the importance of the sector to the national economy,” Mr Meehan said recently.

The ITAA leader urged passengers to check in at least three hours airport during summer peak season to cope with the queues at check-in and security. 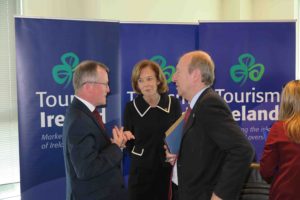 But Minister Ross shot down the calls for assistance from the Government. “The DAA is making quite a lot of money so I don’t see any question of giving them any more money,” he told Travel Extra at Tourism Ireland’s midyear report in Dublin.

Ryanair boss Michael O’Leary has voiced fears over a hard Brexit, claiming that there is a “real prospect” of no flights between Britain and Europe if no agreement is reached on air treaties. But Mr Ross argued: ”I don’t think that’s going to happen. I think the European leaders are going to come to some kind of arrangement.”

Asked if the travel and tourism sector will get a better autumn budget deal under former Tourism Minister, and now Taoiseach, Leo Varadkar, he told Travel Extra: “He’s very sympathetic and he certainly understands it and it’s great success story, but I wouldn’t say it’s it’s an easier sell” at the cabinet table.