Former publican Derek McKnight – now one of the most important food and beverage executives in the Royal Caribbean fleet – paid a side visit to Dublin to meet the media during his break back home from life on the seas.

After the recession took its toll on his Black Sheep pub in Schull, West Cork, opportunity came calling in 2008 when McKnight was hired as as Executive Chef onboard Oasis of the Seas and later Allure of the Seas, each with a combined capacity 8,500 passengers and crew. 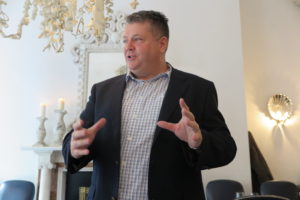 Derek McKnight, head of food and beverages, Oasis of the Seas, Royal Caribbean

Cork City-born McKnight was in charge of all aspects of running the food operation, which included a management team of 350 culinary staff, 24 food outlets ranging from the fine dining restaurants, eight themed specialty restaurants and a 3,000-capacity three-tier dining room, and on average served 80,000 meals a day.

Now Food & Beverage Director onboard Oasis, Derek oversees a team of 1,100 crew members, which is more than half of the entire crew. He is passionate about driving implementations onboard for new initiatives and directives from shore side and spoke in Dublin here and here. He also looks after all VIP guests, groups and charters with elaborate requirements in line with the Royal Way Philosophy.

A passionate Munster and Cork Constitution ma, McKnight has coached the game and is still involved with the Cork club. He undertook his culinary education in Rockwell Hotel and Catering College before embarking on his first ocean stint, joining Cunard in 1989.

He worked as an executive sous chef in Grand Cayman from 1996 for seven years, and the Caribbean island is still a favourite haunt, he told Travel Extra. He returned to Ireland to open and run his own bar and restaurant in his hometown of Schull in West Cork in 2003, before joining Royal Caribbean in 2008. See the photo album on Facebook,