Trending
You are at:Home»Aviation»Ryanair to grow 3pc in Dublin in summer 2019 with 7 new routes 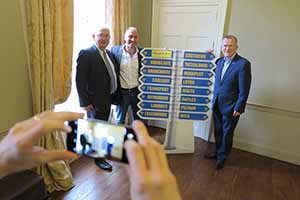 Ryanair have announced nine new routes from Dublin, two of which are continuance of winter services :

Kenny Jacobs said Ryanair Ireland would be 23rd biggest airline in the world as standalone airline with 16.4m passengers and four bases, 150 routes, 16.4m passengers a year. The airline has announced 15 new routes from Ireland in 2019.

Dublin will also have increased frequencies on 13 route bringing the total to 97 routes, 830 flights a week and 13.6 passengers a year.

Four routes from Cork were previously announced and confirmed with the addition of a fifth to Naples, bringing the total to 18 and 71 weekly flights.

Cork flights to Malaga are to be increased to 4w. Ryanair will carry 1.1m passengers to and from Cork in 2019.

A new route from Shannon to Ibiza was confirmed and increased frequencies to Manchester, bring the total to 16 routes, 49 flights a week and 775k passengers a year. Operations at Kerry (five routes, 20 flights a week, 300k passengers) and Knock (12 routes, 44 flights, 600k passengers) will remain the same as summer 2018.

During the course of his presentation, Jacobs said Ryanair brought 41pc of the total tourists to ireland, 4.1m tourists spending €2.3bn.

The airline will grow 3pc in ireland next year, less than half the airline’s Europe wide average of 8pc. Average fare is €39 in 2018, down 3pc. First quarter fares were down 4pc. Wiz at €46 and Easyjet at €60 are the airlines with the next lowest average fare.