Trending
You are at:Home»Aviation»Ryanair continues German ambitions with opening of Dusseldorf base

Ryanair is to open its 11th base in Germany, with a facility opening at Düsseldorf Airport in June.

The Western German city will be its 86th base in Europe, and will be home to one aircraft, as two new summer routes are launched to Alicante and Malaga. 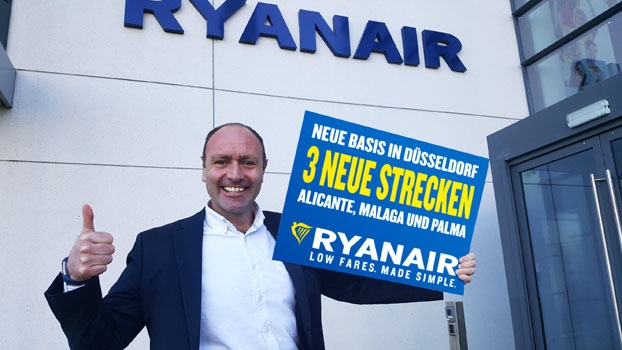 The routes are in addition to the daily service to Palma which was announced earlier this year and the 12 routes operated on behalf of Laudamotion, Ryanair Chief Marketing Officer Kenny Jacobs said.

The move is the latest challenge by Ryanair to Lufthansa which last year overtook it as Europe’s largest airline group by passenger numbers. Lufthansa’s Eurowings subsidiary is the market leader at Dusseldorf.
Ryanair sees huge potential in Europe’s biggest economy, where low-cost airlines typically account for just 10-20pc of traffic compared to over 50pc in Europe as a whole.