Ryanair has extended its connecting flights service to Milan Bergamo Airport, following the launch of a similar service at Rome Fiumicio last month. The airline said that it would only extend the Rome service if it was happy with the results of the move.

The airline is working on facilitating passenger transfers – known as interlining between its European services and long haul routes operated by Aer Lingus and Norwegian Air. Those talks are at an advanced stage, and the Irish carrier is also in talks with Portugal’s Tap on a similar deal.

At a press briefing in Dublin last month, Chief Commercial Officer David O’Brien said of Bergamo: “We have identified 300 new routes that could be created from an airport that practically did not exist a few years ago.” He also said that airport such as Bergamo could emerge as real alternatives to larger hubs. 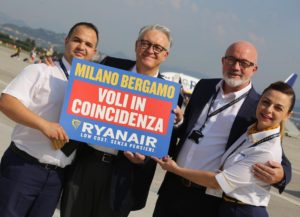 This connecting service is the newest initiative delivered under Year 4 of Ryanair’s “Always Getting Better” programme, with more connecting services to be rolled out at other airports across the Ryanair network later this year.

In Milan Bergamo, Ryanair’s David O’Brien said: “Starting with an initial 25 new routes (rising up to 300), customers will be able to transfer onto their next flight without having to go landside, and have their bags checked through to their final destination.

“This new service under Year 4 of our “Always Getting Better” programme, will be rolled out at other Ryanair airports throughout our network, (with even more routes to be added in the coming weeks and months).

“Ryanair.com, the world’s most visited airline website, also sells 20 long haul Air Europa routes to North and South America. We are continuing our discussions with Aer Lingus and Norwegian – and other potential partners – with a view to launching connections with them later this year as we continue to implement the latest round of upgrades to improve the customer experience.”

Emilio Bellingardi, Director General of Bergamo airport Sacbo, said: “Ryanair’s launch of connecting flights at our airport is a further step in the development process implemented by the airline in its main Italian and southern European base, which is therefore becoming the most important hub in Europe in terms of connections.

“The 15-year-old partnership is successful both on the operational aspect and on the destination offer and flight punctuality, and finds an adequate response from the airport infrastructure, designed to provide even more comprehensive services and better face the needs of passengers.”