Trending
You are at:Home»Aviation»Ryanair launches Knock-Cologne as part of 13-route summer schedule

Ryanair has launched its Ireland West Airport Summer 2019 schedule with a new route to Cologne and 13 routes in total. Ryanair also celebrated carrying 8m passengers at Knock since 1986. 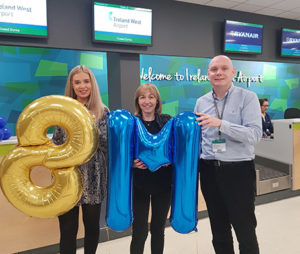 Ryanair’s Robin Kiely said: “Over the last 32 years Ryanair has seen a huge demand for its routes at Knock as customers in the West of Ireland snap up Ryanair’s lowest fares to top destinations including Bristol, East Midlands, Liverpool and London Stansted as well as to a host of European destinations in Spain, Portugal and Italy.”

Joe Gilmore, Managing Director, Ireland West Airport, said: “I would like to acknowledge the loyalty and commitment that Ryanair has shown to the airport and the West of Ireland over the last 32 years providing vitally important international access to the UK and Europe and in particular their continued support for inbound tourism with their popular mainland European services from Milan and Barcelona.”