Trending
You are at:Home»Aviation»Ryanair launching Dublin to Kiev 2w from May 2

Ryanair has announced a new route from Dublin to Kiev, with a twice-weekly service commencing May 2 2019, as part of Ryanair’s Summer 19 schedule. 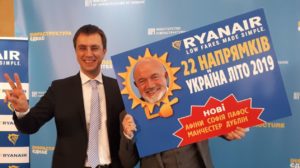 It’s the latest route between Ireland and the east, with Aeroflot recommencing direct services between Dublin and Moscow. Ryanair will operate to the city’s Boryspil International Airport.

Ryanair plans to invest $1.5bn in Ukraine in three to five years, expanding its fleet to 15 planes and passenger traffic to 5m people, Ryanair Chief Commercial Officer David O’Brien said at a meeting with Ukrainian President Petro Poroshenko in the Ukrainian capital on Tuesday. In the summer of 2019, we will open 22 routes from Ukraine. There will be 11 countries, including four new ones,” Mr O’Brien said. As well as Dublin, new routes include Manchester, Sofia and Paphos.

Dublin Airport Managing Director Vincent Harrison said: “With a population of more than 2.8 million, Kiev is a major city in eastern Europe with an abundance of culture and history. The new route will boost trade and tourism between Ireland and Ukraine and I have no doubt it will be popular route in both directions. We will work closely with Ryanair and its management team to promote this new route.”