Trending
You are at:Home»Aviation»Ryanair looks east with expansion into Ukraine from European cities

Ryanair is to begin flights to a 34th country, with services to two cities in Ukraine from this winter. The airline said it’s aiming to deliver 510,00 passengers between Kiev and Lviv to and from European destinations, with fares from €19.99 in October and November. 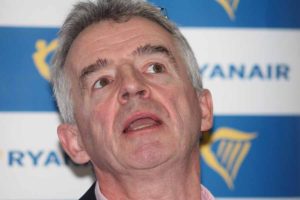 Ukraine’s Minister of Infrastructure, Volodymyr Omelyan, said: “The arrival of Ryanair in Ukraine is without exaggeration, a remarkable event for Ukraine. Negotiations lasted for several years, and I am proud that our team was able to successfully hold them. I am convinced that Ryanair will be another bridge that connects the infrastructure of Ukraine with Europe and it will be a good signal for the world’s major investors.”

The Director General of Danylo Halytskyi International Airport in Lviv, Tetiana Vasylivna, said: “Lviv is traditionally considered to be a western air gateway to Europe. With the air carrier’s entry into this market, citizens of Lviv will finally have the opportunity to fly on low fares to Europe, which is a great advantage over other airlines and a prerequisite for the development of competition in the air transportation market of Ukraine.”