Laudamotion, in which Ryanair has a 24.9pc stake, is to start services from Dublin Airport to Vienna from October 28.

The daily service will pit it against Aer Lingus on the route, with Laudamotion flights departing Dublin at 14.05 hours and departing Austria at 16.15 hours.

Laudamotion is the latest venture by aviation entrepreneru and former Formula 1 champion Niki Lauda and was formed following the demise of the NIKI airline. Ryanair took a 24.9pc stake in the carrier last March, and will boost it to 75pc subject to approval by EU competition regulators. 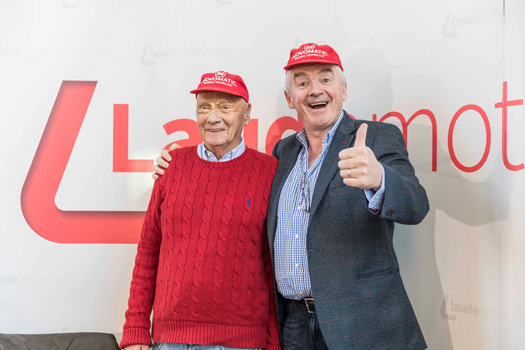 Ryanair said this week that it hopes to expand LaudaMotion’s Airbus fleet to between 30 and 50 aircraft over the next five years.
Apart from Dublin, LaudaMotion will also fly to Marrakech in Morocco and the Jordanian capital Amman, as well as Bucharest, Copenhagen, Dublin, London Stansted, Madrid, Paris Beauvais and Rome.
See also  Ski Heaven!

Barcelona, Bergamo, Bologna, Faro, Krakow, Larnaca and Seville will also be served from Vienna, along with Fuerteventura, Gran Canaria, Lanzarote and Tenerife in the Canary Islands.

Meanwhile, Ryanair told Reuters it has never made an approach for low-cost carrier Norwegian Air and does not intend to. The statement followed claims by Norwegian Air Chief Executive Bjoern Kjos that there had been contact between the carriers.